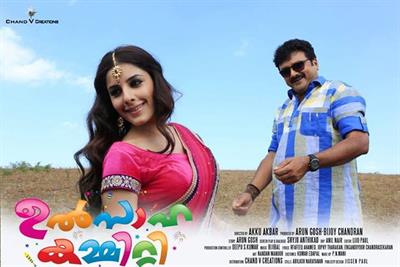 Akku Akbar who has delivered hits like Veruthe Oru Bharya, Vellaripravinte Changathi and Bharya Athra Pora is all set to entertain the mass audience with his latest flick 'Ulsaha Committee'. Touted as a complete family entertainer, the movie actually has its roots on friendship and love creamed with humour.

Apoorvan (Jayaram), Babumon (Kalabhavan Shajon), and Chopra (Baburaj) are very thick friends, who live in Mandarakadavil Village. As the name suggests Apoorvan (Jayaram) is a having a different personality which makes him popular among the villagers. Interested in inventing things and doing experimentation, Apoorvan invented the machines to climb coconut trees to extract milk from the cow and many other things, which was useful for the people living in the village. Even though, Apoorvan has studied only up to 7th std, he has determined mind to be become a scientist like C.V Raman or Albert Einsteen.

But for his inventions, Apoorvan had to get financial support from his true friend Babumon who is a married fellow depending on his wife's ornaments and assets for money. On the other side, Chopra, a goon saves Apoorvan from the villagers when his inventions fail. Once as one of his invention failed, the three were forced to move away from their village.

Reaching the high range, they get acquainted with Rossamma ammachi (Sheela), a millionaire. The resulting events results in the story of this comedy movie. Ishaa Talwar plays Rose Mary, Neethu as Suma and Lakshmipriya as Chandrika in this romantic comedy movie. Vinaya Prasad, Lakshmipriya, Shaju, Kochupreman, Sunil Sugatha, Joy Mathew, Kalinga Sasi and Nelson are also playing prominent roles in the movie.

Even though a number of movies are under work preparing to release in May, the makers of do 'Ulsaha Committee' expect to get the maximum audience. The shooting has already been over and the movie is currently at the editing table for the final cut. After the post production works, 'Ulsaha Committee' would reach theatres on 2nd May 2014.