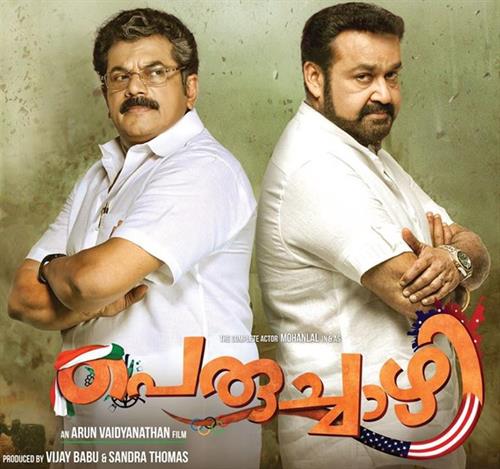 If a real fan of Mohanlal, you might be thrilled to see the first look posters of 'Peruchazhi'. Made with a mammoth budget of 15 Crores, one of the most anticipated malayalam movie of 2014 Peruchazhi is currently at its first stage of production.

Written and directed by Arun Vaidyanathan, the movie which stars Mohanlal and Mukesh in lead revolves around the life of Vishwanathan. Produced by Vijay Babu and Sandra Thomas under Friday Film House banner, Peruchazhi would be one among the costliest movie to be made in malayalam.

The movie is themed around two close friends who are bitter political rival at the same time too. The political tricks and games played between an Viswanathan (Mohanlal) and Minister Raghavan (Mukesh) is the core of the movie.

As an upcoming politician, Viswanathan has to go to United State of America during the time of an election. Viswanathan was send to USA with a mission. His purpose was to raise the political graph of one of the party candidate who was contesting as the governor of a state.

Being a governor, the person could not keep his vows given to the people. Having an extra bone, Vishwanathan did know all the tricks to make the graph climb high and to make him victorious. But the only drawback of Vishwanathan was his limited knowledge in English.

But the effort made by Viswanathan to complete his mission will be picturized in a hilarious way. Meanwhile the political games and American adventures of Viswanthan and Minister Raghavan's efforts to counter his tricks will keep the audience intact.

Vijay Babu, Aju Varghese, Ragini Nandwani, Sandra Thomas, Shankar Ramakrishnan, Baburaj and Delhi Ganesh would give life to other prominent characters in the movie. , Vijay Babu plays the one who takes Viswanathan to the US while Baburaj would give life to Pottakuzhi Jabbar and Aju Varghese as Valayalar Varkey, the close associates of Mohanlal. The music for the movie is set by Arrora (Navin Iyer) while the camera would be helmed by Aravind Krishna.

It is also known that a Hollywood actor has been roped to play the Governor. Scripted by Ajayan Venugopal(Akkarakazha fame), the movie will start rolling from 14th April at America and is expected to release in June 2014. The hit combo of Mohanlal and Mukesh is back on frames with 'Peruchazhi'.

The first look poster of the movie was unveiled at a colourful function attended by invited guests. Like the name, there will be a total difference in the making of the movie. The first look poster of the movie featuring Mohanlal wearing a mundu fully clad in white and white, with pronounced side burns and a beard went viral among the fans through social media sites. Heard from the grapevine, the design on the mundu is the same as that used by Roman emperors to denote power.

The movie speaks on similarities between the politics of India and the US, the two largest democracies of the world, in a humorous way. Completely shot in United State of America, this movie would be complete political satire. So get ready for the roller coaster ride offered by Mohanlal.