After sharing screen space for more than half a dozon movies, the successful pair of Kunchacko Boban and Biju Menon is back with a bang. They would be seen in Johny Antony's next outing which would be shot exclusively in Kolkatta. Titled 'Bengalikatha', the movie is scripted by Benny P Nayarambalam, the movie will tell the life of an agent who arranges migrant Bengali workers for local works. 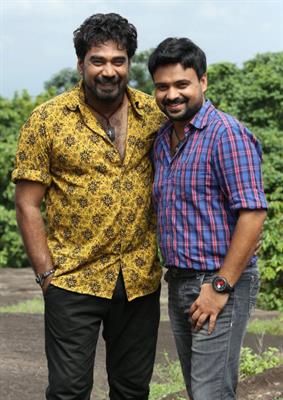 'Dracula' fame Sudheer Babu makes a majestic comeback as Manikandan with shades of a negative character. To give life to the character, Sudheer has given away his hollywood 'Vin Diesel' get up and six pack body. He had increased 10 kg of weight and also had grown a thick moustache. In the film Sudheer will be portraying a negative character named 'Manikantan'.

This movie produced by Howli Pottur under the banner of Dream team production will also have Salim Kumar and Suraj Venjaramoodu in other prominent roles. . 'Bengalikatha' will start rolling from 24th April in Kolkata.

Biju Menon and Kunchako Boban have already show their own screen chemistry in movies like Spanish Masala, Malu Singh, Three Dots, Romans, 101 Wedding, Ordinary and Seniors are expected the deliver the same magic in this upcoming movie too.

Johny Antony who has delivered hits like CID Moosa, Kochi Rajavu, Thuruppu Gulan and Cycle is back with a bang with his latest venture which will be a complete family comedy entertainer. Even though his previous flick Thappana couldn't make much moment in theatres, Bengali Katha is expected to bring back the golden period for the director who already has made a space in the malayalam film industry.

Meanwhile, young actor Kunchacko Boban is shuttling from location to location busy shooting for a couple of movies. His next releases include Lijin Jose's 'Law Point' and Rosshen Andrews' 'How Old are You? which would reach theatres soon.