The dearth of Cochin Haneefa has really made a vacuum in the Malayalam film industry. Even the absence of Jagathy Sreekumar too is a great loss for the malayali community who kept him close to their heart. But now it is heard that a movie which united the actors is gearing up for release. Directed by K K Haridas, the movie titled '3 Wicketinu 365 Runs' featuring Jagathy Sreekumar in lead role would be a complete entertainer. 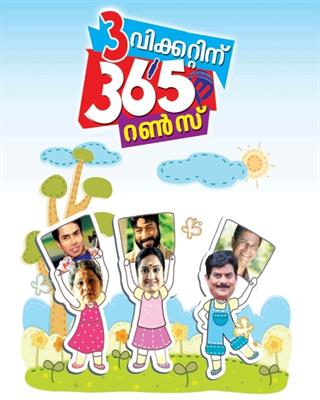 Much interestingly, Jagathy Sreekumar has donned five different characters in this movie. 'Moonu Wicketinu 365 Runs' revolves around the life of five brothers who got separated at a particular situation. Grown up following different religions and customs, they live in the same town. The eldest among them is Man Singh, a Circle Inspector who is a clever, efficient, candid police officer who stands for justice and truth.

The second brother is pastor Thankachen who is a well known preacher. Meanwhile the third brother Bhairavan is a pick pocketer who holds a droll character. The fourth brother named Marthandan is a real estate businessman. The youngest among the five is Padmadalakshan, a ballet dancer with feminine trait in his character.
Even though all the brothers live in the same town doing their own jobs for their livelihood, there hadn't been an occasion to come together. In the latter half of the story, the brothers unite which brings lot of fun and excitement.

Cochin Haneefa also plays pivotal role while Hariseer Asokan, Guinness Pakru, Navas, K. P. A. C. Lalitha, Saddique and Kalpana will give life to other prominent characters in the movie. For the story of Jayaprakash, the dialogues and screenplay has been handled by Babu Pallassery. The lyrics for the movie have been written by Din Nath Puthuchery while Anil Nair stayed behind the camera as the cinematographer. Produced by K.A.Habeeb under the banner of Kiliparambil Pictures, '3 Wicketinu 365 Runs' would reach theatres by the end of May 2014.