Shajiyem who made his last outing with Miss Lekha Tharoor Kanunnathu, with Meera Jasmine in the lead is all set to helm his new project. Titled 'Bad Girls', this bilingual movie, to be shot both in malayalam and tamil would start rolling soon at Chennai. 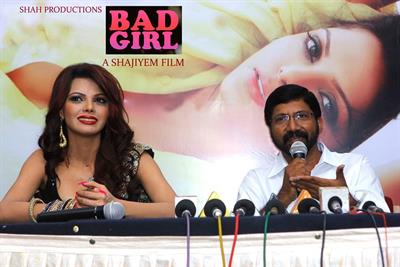 'Bad Girl' is said to be a loose adaptation of Monica Bellucci's Italian romantic movie 'Malena' which was released in 2000. It would also mark the malayalam debut for actress Sherlyn Chopra. The movie revolves around the life of a young girl who aspires to become a model and actress. During the struggling career, she has to undergo various challenges. Much impressed with the script, Sherlyn agreed to do the movie.

Sherlyn plays the role of bold and daring girl Priya Sharma, a sensuous super model in this love story. Set against the backdrop of the ostentatious fashion industry, the movie will reveal the love, lust and passion of a woman. The emotionally persuasive journey of a woman who has to go thought high and low conditions are being picturised here. As being ambitious in real life, the character too is much determined to reach heights. Stand out not for her innate sensuality, the role suits for her personality trait flawlessly.

The vulnerability element of the character which could relate with her personal life made her to choose the role. This romantic movie narrates the link-ups of the model with a middle-aged person and a very young boy. Sherlyn has also appreciated the Malayalam film filmmakers for their discipline and talent. Sherlyn is truly excited to don the lead role while she would be seen in the title song too.

After the pre production works, the shooting will begin by May end. Neha Khan will play an important role in the movie. 'Bad Girls' is produced by Salim Shah under the banner Shah Productions. It is also known that the movie will be dubbed in Hindi, Telugu, Bhojpuri, kannada and few other languages. Sri Murali, a keyboard player who has done over 2500 films in various languages and has worked with legends like MS Viswanathan, Isaignani Ilayaraja and AR Rahman will set the tunes for the movie.

Sherlyn Chopra, a model and actress by profession is known for her active presence in bollywood and other regional movies.