Cinematographer Venu who has an experience of working behind the camera for more than 80 movies is up for 2nd directorial venture after the much acclaimed movie 'Daya', which gained him Kerala government's award for best debutant director. After a long gap of 16 years, the veteran movie passionate is ready with his next outing. Titled 'Munnariyippu', the movie which features Mammootty in lead role revolves around the life of a man who was convicted and put in jail. 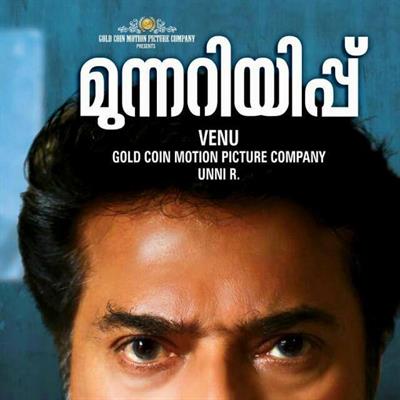 The story develops through a harbor town. Each individual passes through various stages during his life period. Ragavan (Mammootty) is a normal human being who likes to live in isolation, free from the worldly matters. He was a convict and got released from the jail on completion of the jail terms. During the time a girl named Anjali (Aparna Gopinath) enters his life.

Anjali Arakkal is a journalist who had been working with a media for a long time. As Anjali couldn't establish herself as a successful journalist, she was looking for an opportunity to show her mettle and be success in her profession. She wished to know more about Raghavan and wished to write a biography about him.

The meeting with Raghavan was a turning point in the life of Anjali. As Raghavan, disclosed the life story and also about his jail imprisonment, it opened doors for some shocking truths. Tightly packed with lot of suspense and unpredictable revelations, the story would keep the movie goers intact.

The movie is scripted by R Unni who has earlier lent his hand for Chappa Kurish, Big B and Bachelor Party. Prathap Pothan, Nedumudi Venu, Joy Mathew, Sasi Kumar, Renji Panikar, Sreeraman, Kottayam Nazir, Sudheesh, Parvathy, Sasi Kalinga, Aakash Ramkumar and Muthumani will give life to other prominent characters. 'Munnariyippu' is produced by Ranjith under the banner Gold Coin Motion Pictures. After the post production works, the movie would reach theatres in June.

'Daya' which featured Manju Warrier in lead was a visual treat for the audience while they enjoyed it with full heart.