Ashkkar Soudaan, then newphew of Mammootty who had appeared in a handful movies as supporting characters would play the lead role in Jespal Shanmughan's 'Mithram'. The movie narrates the captivating incidents that happen in the life of a news correspondent on a night during his journey. 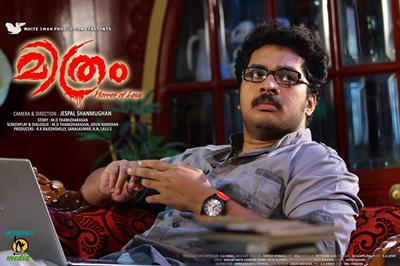 On an occasion Sidhu (Ashkar Saudhan), a journalist who had to travel from Peermedu to Alapuzha witnessed some interesting events. He was forced to witness those scenes and incidents that came up in his dreams. As he reaches a ghost bungalow, he could observe some interesting facts right before his eyes.

The story also takes the viewers to the past. Meera (Gauri Krishna) and Jeny (Surya Kiran) are true friends. Meera is very beautiful and smart girl who has completed her studies from abroad meanwhile Jeni, used to write poems about her friend. Meera herself takes initiative to publish these poems in magazines.

With Jeny's poems gained many fans, one among them Madhavan (Ashkar) falls in love with her. As Meera was too selfish, she cannot accept the fact that Jeny has a lover. Moreover Meera also loves Madhavan. The ego between the two friends later paves way the death of Meera with Jeny being responsible for that.

Gauri Krishna, a resident of Kottayam who has completed her post graduation is making fresh appearance with this movie. Surya Kiran has already appeared in a number of movies. The cinematography is safe in the hands of the director himself. For the story of M. D Thamizharashan, the screenplay is handled by Arun Nadhaan and M.D Thamizharashan. For the lyrics of Vayalar Sarathchandra Varma and Rajeev Alunkal, the tunes are set by K A Latheef.

Ashkkar who has completed a course in film editing is looking for more opening in the industry. Mithram is expected to be the stepping stone for the actor who would be seen two get-ups in the movie. Ashkkar has also been chosen to play the lead in Suku Menon's 'Sanghumugham' which is also set in a horror background.