For the first time in the history of malayalam film industry, 7 prominent comedy stars would be uniting for a single project. Titled 'Malayalakkara Residency' the movie directed by debutante Kuttichal Sasikumar features Jagathy Sreekumar, Innocent, Salim Kumar, Suraj Venjaranmoodu, Bheeman Reghu and Kottayam Nazir and Prem Kumar in lead. The movie is themed around a group of people and their expedition which change their life forever. 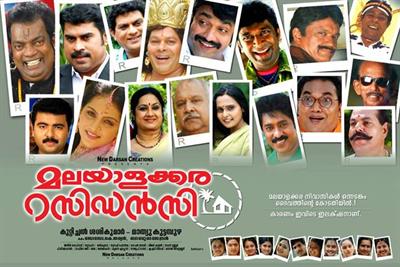 Kaushal Kumar (Jagathy Sreekumar) and Chackochan (Kottayam Nazir) are associated with Malayalakkara Resident Association. Kaushal Kumar is the President of the Association while Chackochan, the former President. As both have difference in opinion, during the time of discussion, they used to show enmity through words. Once in a meeting, they decided to take a break from the hectic works and go for a journey.

Along with family members, all started off for an outing. They even think that, a big catastrophe was geared up to receive them. While enjoying the trip singing and dancing, their journey was halted by a Harthal which came on their way.

Even though, they send the supporters and resumed their trip, they were forced to end their journey. The supporters throw stones on the bus and even set bus on fire. Rest of the story clubbed with twists and turns, takes the story to the next phase which would keep the audience intact.

The camera is helmed by Anil Gopinathan. Jassi Gift, Pradeep Palluruthy, Afsal, Anwar and Rimi Tomy have lent their voice for the songs. Under the banner of New Darshan Creations, the movie is produced by Mathew Kuttumpuzha. The shooting of the most has already been completed and is expected to reach theatres by June 2014.