After a break of 21 years, legendary filmmaker Sreekumaran Thampi is back in business with full power scripting and directing for his movie. Titled 'Ammathottil', the movie will also mark the reunion of thespian Madhu and yesteryear actress Sarada. Thampi who started his filmy career in 1974 has already produced 24 and directed 29 movies. 'Ammathottil' is themed around a joint family. As the joint family system has completely disappeared from the state, the filmmaker wishes to create awareness about the importance and generate the ambiance of joint family system and its enjoyment. 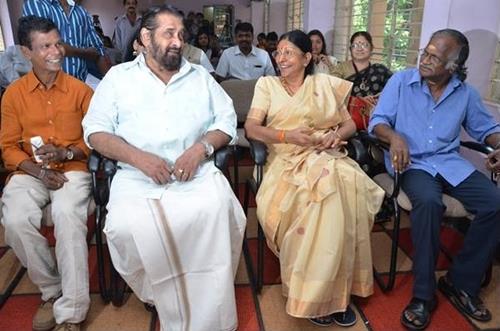 Joseph Pushpavanam (Madhu) is a renowned poet while Sulakshana (Sharada) is his college sweetheart. The couple had to part ways due to some unfortunate events which happened in the life of Sulakhshana. She who gets trapped in a loveless marriage was later abandoned by her children and left homeless.

In the later stage of her life, she finds love in Joseph who enters her life once again. Even though age affects the body, the mind and love is ageless. Through the movie, Sreekumaran Thampi portrays the reinvention of love by the couple after a long separation.

Madhu who has already worked in eight movie helmed by Sreekumaran Thampi is excited to be a part of this upcoming project. Even though in normal sense 'Ammathottil' means the cradle in which unwanted babies are left, the term is the movie means a place where elderly mothers are left.

As the theme has much relevance in today's world, it would also be an eye opener for the society. Even though Sarada entered the industry through Telugu movies, she got real recognition working in malayalam.

Produced by Roy John Mathew under the banner of Ragamalika Combines, the movie is blessed with the presence of National Award-winning actor Suraj Venjarammodu, Lalu Alex, Mammookoya, Indrans and Mumbai-based Kathakali artiste Tara Varma. The movie will start rolling from August and would reach theatres by December.