Kerala Public Service Commission has published the exam calendar for August 2014 at the official website. Kerala PSC exam timetable and schedule for August 2014 in PDF format can be downloaded from the PSC website for further reference. Candidates can visit Kerala PCS official website (http://www.keralapsc.gov.in/) for additional information.

Kerala PSC has declared the details about 35 exams which are slated to be held in August 2014. Here are the names of 10 exams while the full list can be downloaded as PDF format. 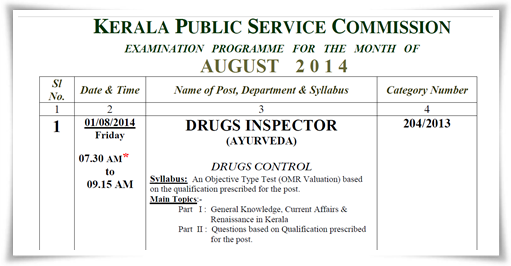 Details regarding each exam, timing, syllabus and date of downloading the hall tickets are mentioned in the exam calendar. It is advised to go through the exam calendar of August 2014 to get well acquainted it.

If you have applied for any of the exam mentioned in the Kerala PSC August exam calendar, do follow the instructions to download the hall tickets from the official website of Kerala PSC. The preliminarily test consists of an objective type exam (OMR Valuation) based on the qualification prescribed for the post. It is very important to remember the following key points while preparing for the exam.

How to score high ranks for PSC exams?

As there is no short cut to success, aspiring candidates who wish to get a job with the Kerala government should make tired - less effort to get into the big league of top rankers. Systematic learning along with developing rational thinking would do better for the exam. It is very important to have a well acquaintance with the syllabus. Taking mock tests before the test would better the performance in the exam hall. It is also significant to follow the time management techniques.

Kerala PSC exam calendar July 2014 has been published in the official website of Kerala PSC. Kerala PSC exam timetable and schedule for July 2014 in PDF format can be downloaded and use for further reference. Complete details about various exams, syllabus and hall ticket details are also mentioned here. Candidates can visit Kerala PCS official website (http://www.keralapsc.gov.in/) for additional information.

Kerala PSC exam calendar October 2014 has been published in the official website of Kerala PSC. Kerala PSC exam timetable and schedule for September 2014 available in PDF format can be downloaded from the PSC website for further reference. Candidates who are appearing for the exam can visit Kerala PCS official website (www.keralapsc.gov.in/) for additional information.