The Kerala Public Service Commission (Kerala PSC), the organization in charge to conduct the governmental tests has published the exam calendar for December 2014 at the official website. The Kerala PSC exam timetable and schedule for December 2014 is currently accessible in PDF format which can be downloaded from the Kerala PSC website (www.keralapsc.gov.in) for additional reference.

21 exams are being scheduled to conduct in the month of December 2014 which includes the Last Grade Servant exam in selected districts. Here are the names of 10 important exams to be conducted in December 2014. The complete list and details of the upcoming exams can be downloaded in PDF format from the official web portal of the Kerala Public Service Commission. 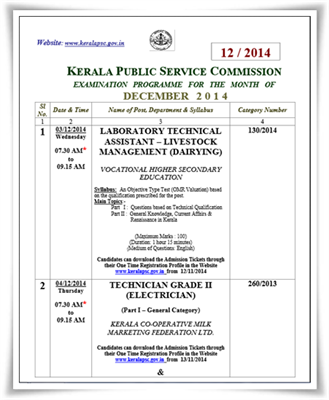 Kerala PSC exam calendar July 2014 has been published in the official website of Kerala PSC. Kerala PSC exam timetable and schedule for July 2014 in PDF format can be downloaded and use for further reference. Complete details about various exams, syllabus and hall ticket details are also mentioned here. Candidates can visit Kerala PCS official website (http://www.keralapsc.gov.in/) for additional information.

Kerala PSC exam calendar October 2014 has been published in the official website of Kerala PSC. Kerala PSC exam timetable and schedule for September 2014 available in PDF format can be downloaded from the PSC website for further reference. Candidates who are appearing for the exam can visit Kerala PCS official website (www.keralapsc.gov.in/) for additional information.