Malayalam film industry which has undergone experimentations during the last decades is trying as much possible changes in the making of movies. As a number of youngsters with dreams to make their own space enter the industry, good projects have been delivered. With an experience of working behind the screen with 'The Last Vision', Sajan Kurian is coming up with his next project. 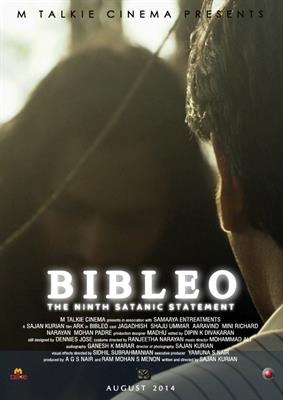 The story and screenplay is handled by Sajan himself. Mini Richard who made her entry with 'Parankimala' will play the role of Sarah, a professional killer. Mini had to do a lot of preparations to fit the role. Touted as a psychological & fantasy thriller, 'Bibleo' could be a complete entertainer which will keep the audience intact.

Sajan Kurian's previous venture 'The Last Vision' featuring Arun Ramkrishna, Olga Popova, Milind Soman and Jagadish had truly grabbed the eye balls. Based on the short story written by Sajan, 'Samaya' (Time Traveller), the movie was appreciated by viewers. He is a self-taught director who has no background in filmmaking. With a 'passion' to make cinema, Sajan wishes to walk through, less travelled.

As like his former project, 'Bibleo' too is expected to satisfy the interest of the spectators. Even though a number of entertainers which falls in the genre psychological, fantasy have reached theatres, 'Bibleo', a movie tagged as 'psychological & fantasy thriller' would be very rare in malayalam. Packed with all essence including suspense, tension and excitement, the movie would be a matter of change in the film industry.

With an innovative approach, after the final cut, the movie would reach theatres on 15th August 2014.