National Film award winner actor Appukutty is familiar among the movie lovers in South India. During his 2 decade long acting career, he has given life to many characters which truly won the hearts of the spectators. After playing a pivotal character in 'Issac Newton S/O Philipose', Appukutty is donning the lead role in 'Murukku' written and directed by debutante Sunil Dutt Sukumaran. 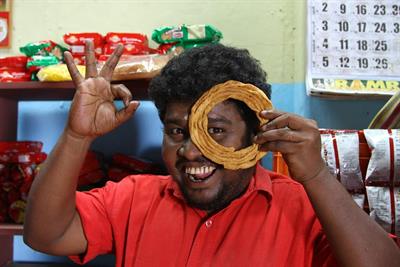 'Murukku' is produced by R Chandrasekharan under the banner of Rare Pictures. Even though, made with a limited budget, the director has given much care in adding all the elements to craft it into a stylish movie. Moviegoers can expect maximum fun for this movie which is creamed with essence to entertain them.

Sunil Dutt Sukumaran has earlier published a book titled 'Padmarajante Simhasanam', a collection of nine short stories. Meanwhile Appukutty who is credited with more than 20 movies in his name is getting yet another chance to prove his acting skill. For his role as Azhagarsami in Azhagarsamiyin Kudhirai, Appukutty was praised by film critics and even won the National film award for best supporting actor.

The movie would also be a launch pad for tinsel town beauty Ahana Kochhar who has completed her acting course from Barry John Acting School. With an experience performing in the theatre and fashion world, multi –faceted personality Ahana wishes to get the merit of the time and talent. It would also be an opportunity for the new faces to show their talent on silver screen.