Mathrubumi Thozhilvartha, one of the prominent weekly for job prospects in Kerala has published its 2nd August 2014 issue. As its previous editions, more importance is given to the Kerala PSC notifications, solved paper and exam preparations. 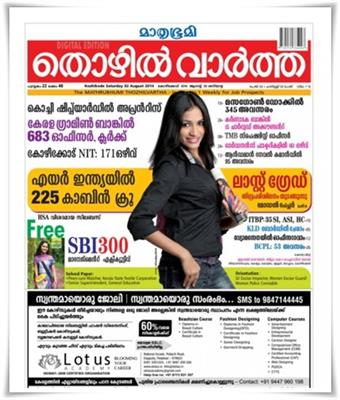 The highlights of the current issue are the latest PSC Notifications, Solved Papers of Peon-cum watcher, Kerala State Textile Corporation, Senior Superintendent and General Education. Special orientation is given to upcoming SI/Excise Inspector, Women Excise Guard/Women Police Constable exams. Hardcore coaching of various upcoming exams would give insight to the candidates who are currently under preparation.

While going through the pages, details about vacancies reported from various organizations and departments are given with much prominence. 683 Officers in Kerala Gramin Bank, 345 vacancies in Masagon Dock, 300 Management executive in SBI, 225 Cabin Crews in Air India and 161 job opportunity in Ordinance Factory is also reported. Solved Papers of Peon-cum watcher, Kerala State Textile Corporation, Senior Superintendent and General Education are published for reference.

Special orientation is for the Police exams including SI/Excise Inspector, Women Excise Guard/Women Police Constable would enable the candidates to make a well understanding about the previous questions and exam pattern. The solved papers will also help those applicants who are in taking the upcoming exams.

As usual, the free booklet 'Harisree' updated with information on the latest general knowledge will give adequate facts and figures. It also serves as a companion for the young job seekers to update news events. As the Police exams are just few days away, applicants need to go through various new update magazines including the current edition of 'Thozhilvartha'. Having a circulation of more than 1 lakh copies, 'Thozhilveedhi' is one of the most popular employment newspaper in Kerala.

So can you leave the current issue of this flamboyant employment newspaper? Grab 2nd August 2014 issue of 'Thozhilveedhi' from your nearest book vendor and make your dream come true.