If things work properly, 4 superstars of Indian cinema would join for an upcoming venture. The project helmed by ad filmmaker Sreekumar is based on the 1984 famous novel Randamoozham(Second Turn) written by Jnanpith Award winner M.T Vasudevan Nair. The movie titled 'Randamoozham' will bring Amitabh Bachchan, Mohanlal, Vikram, and Aishwarya Rai together. 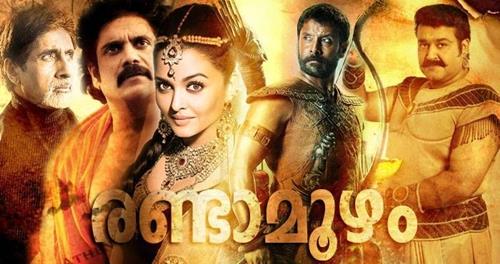 This big buget movie to be produced by Gokulam Gopalan under the banner of Sree Gokulam Movies will be made in major Indian languages including Hindi, Tamil, Malayalam and English. Much interestingly, music maestro AR Rahman will set the tunes while Sabu Cyril will do the art direction.

According to reports, Mohanlal will play the central character Bheeman, Amitabh Bachchan will give life to Bheeshmar, Vikram will be playing Arjunan and Aishwarya Rai will essay the role of Draupathi. Telugu superstar Nagarjuna is also rumoured to be included in the star cast. If the project goes on floor as per plans, Randamoozham will be the most expensive project of South Indian cinema.

Sreekumar, with an experience of directing advertisements including that of Kalyan Jewellers is aiming to deliver a visual delight for the moviegoers. The camera will be helmed by noted cinematographer K U Mohanan. The movie will be released as 2 parts; the first part will depict the childhood and infantile age of Pandavas and Kouravas while the second part will exemplify their grown up stage and rest of the incidents. The second part would be released after 41 days of the release of part 1.

Randamoozham is set as a retelling of the Indian epic Mahabharata, from the viewpoint of Bhima. During the stage of Mahaprasthanam, the Pandavas give up their kingdom and other worldly possessions and set for the final pilgrimage to Himalayas with an aim to enter the heaven in bodily form. M.T Vasudevan Nair's novel has been widely read and even translated into English with the title "Second Turn". The thrills will be choreographed by Chinese experts.

As an end of all the rumors Mohanlal confirmed in the role of Bheema in Hariharan's Randamoozham malayalam movie. The film is based on M.T's classic novel Randamoozham written in 1984.The shooting of Randamoozham will start on 2012. Read more about the latest news of the film.