Smart City Kochi is upcoming project in Kakkanadu, the heart of Kochi. It is a shared venture of Kerala Government and Dubai Companies TECOM Investments includes Tecom and SAMA Dubai. Initially Kochi smartcity project is planned to build up in an area of 246 acres. Kerala Governemnt has got special economic zone (SEZ) status from Central Government. 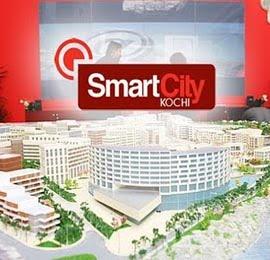 Earlier, State Chief Secretary Palat Mohandas and Dubai Technology and Media Free Zone Director General Ahmad bin Byat signed on the memorandum of Understanding (MoU ) at a ceremony which was taken place with high security at the Taj Malabar Hotel. The police arrested and took away the protesters who tried to run a demonstration outside the hotel by stating that the project was not favorable for the State of Kerala. With this MoU ended the long pending of negotiation which started around one-and-a-half years before. But it is again started the disputes against the MoU and the agreement of the smart city Project. Anyhow Chief Minister Oommen Chandy, who was initiated to execute the project, had tried his maximum to resolve the resistance from the opposite parties through discussions.

According to MoU the Kerala government should shift ownership of the present Info park project of IT Business Park in Kakkanadu to Dubai Internet City (DIC).Then Info Park would combine with the Smart City project which starts construction closely. In that case Oommen Chandi could not rectify consensus in favor of the project that promises to provide business support services, residential hospitality, retail and recreational facilities etc. Then LDF comes in to picture with a high opposition against the proposal to shift the Info park to the DIC and the Bharatiya Janata Party also resisted by stating the smart city project as an anti-national project.

By surviving the opposition from the both political parties of Kerala, Oommen Chandy went on with the project by declaring the project is essential for a fast growth of IT field and State as well. The Group of Technopark Companies (G-TECH) at Trivandrum also comes in fron by supporting to the chief minister stating that the project is crucial for the state to resist against the IT smart neighbor states like Karnataka, Tamil Nadu. In this MoU Kochi Smart City project's first stage would expand around 350 acres of land in the out skirts t of Kochi, Kerala's commercial capital. Out of this, the Kerala government agreed to give 100 acres as lease to Dubai Internet City (DIC). The rest 250 acres will be sold to DIC at an understanding cost of both parties. Around seven years would take to finish the first stage expansion. Afterward Smart city will be further developed to 1,000 acres. In the first stage itself Kochi smart city project is expected to 33,000 jobs in various areas of jobs and following years developments of the project will provide other 75,000 employment opportunities in Kerala.

DIC ensures that the Kochi Smart City developments would change Kochi as one of India's major IT destinations. Also Kochi Smart City will generate its own economy with entire IT industries. DIC emphasizes its key objective which is to take advantage on the plentiful human capital that present in the state of Kerala.