7of the 20 cabinet ministers of Ommencahndy govt were sown in today at the function held at Thiruvanathapuram , on 18 may 2011. Chief Minister Ommenchandy, IUML leader Shri Kujalikutty, Kerala Congress Leader KM Mani, PJ. 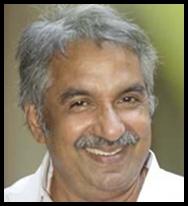 The govt which won the 2011 Kerala Assembly election with wafer thin majority of 4 seats, Had to give minister ship for every party with single seats. Major party congress got 10 ministers including chef minister. The allies have secured major Ministries, IUML bagged four important ministries that including, Minister of PWD, Minister for Industries, Minster of Education and Minster of IT.

Where Kerala congress demanded for Four Ministers but had to satisfy with 2, K.M Mani as Finance minister and P.J Joseph as Irrigation minster. RSP(B)- Labour & Employment and Training , KC(B)-Tourism, KC(J)- Food & Civil Supplies. The decision is yet to be taken on the post of Speaker and Deputy speaker, KC(M) is pushing for the post of Speaker and one more minister
Complete list of MLA's Kerala Assembly 2011

The complete list of Minister of Oommen Chandy Govt