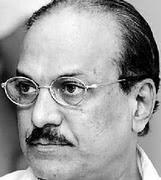 Prominent Leader and General Secretary of Indian Union Muslim League (IUML), P. K. Kunhalikutty is popularly known as 'Kunhaappa' among his fans in Malappuram and Kozhikode. He started his political carrier through MSF, during studies. He is also serving presently as Director, Chandrika Daily and Director, Muhammed Koya International Foundation

P. K. Kunhalikutty has been the Minister for Industries, IT & Social Welfare in Kerala under A.k Antony, K.Karunakaran and Ommen chandy Govt. Later he was thrown out of power because of the allegations levelled against him by the opposition. He contested Assembly elections 6 times, the only time he was defeated was in 2006, he lost to his former co-worker in IUML K.T Jaleel by a margin of 8781votes