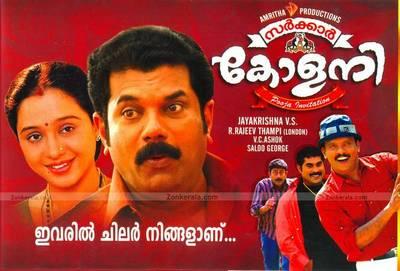 Sarkar Colony is a new Malayalam movie which will release in the theatres on May 22nd 2011. The lead roles in the movie will be portrayed by Mukesh and Devayani. The director, Jayakrishna has earlier directed the movie 'Kancheepurathe Kalyanam' as an assistant to director Fazil. Sarkar Colony is his first movie as an independent director. The film has completed shooting within record time of twenty three days. With such experienced cast like Mukesh and Devayani, this would not come as a big surprise. Sarkar Colony has been produced by Rajeev Thampi under the banner of Amritha Productions. 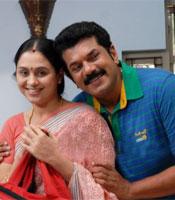 Sarkar Colony portrays a very simple story of ordinary uncorrupted government employees who receive very meagre salaries and tries to meet their expenses with this amount. These few uncorrupted employees live together in the same colony. That is how the name of the film Sarkar Colony originated. In order to make some quick money, these employees depend upon some extra business ventures. Though they are government employees, they never accept bribe from anyone. They are quite different from the other employees in this aspect. Sivaramakrishnan (Mukesh) is working as a clerk in PWD department whereas his wife Padmini (Devayani) works in the same department as an engineer. Due to this professional difference, many conflicts arise between the couple. While Sivaramakrishnan tries to dominate his wife at home, she dominates her husband in the office. Since he does not like to handle too many responsibilities, he always shirks away his promotions. There is another family of RTO officer Mukundan (Ashokan) who is not at all corrupted and never takes any bribes though if he wished, he could have easily done it in his job. But his wife (Sona Nair) does not possess the same ethics and she tries to persuade him to take bribes so that they can have a more comfortable life. She cites examples of other people who live luxuriously by accepting bribes. Another character in Sarkar Colony is Jaffer who works as an employee in the Water Authority. He is a thorough drunkard and would do anything to get money for his drinks. Due to this habit of his, he is known as 'Jamyam Jaffer' in the colony. As both Sivaramakrishnan and Mukunan are uncorrupted people, they try to earn more money through some side businesses. A well-known person in the multi-level marketing field called Puthenpurakkal Padmanabha Pillai (Jagathy Sreekumar) traps these two innocent people by offering them ways to become rich in a very short span. The way these side businesses affects the members of the society is shown in this movie. The entire story will be depicted in a humorous way and most of the kings of comedy in Malayalam films such as Mukesh, Jagadish, Jagathy etc are present in the movie.

The supporting cast of Sarkar Colony includes prominent actors like Jagadeesh, Jagathy Sreekumar, Ashokan, Suraj Venjaramoodu, Salim Kumar, Narayanankutty, Jaffer Idukki, Sona Nair, Kochupreman, Sajan Palluruthi, Ambika Mohan, Geetha Vijayan and Seema Nair. The music for this film has been composed by the famous playback singer, MG Sreekumar and the lyrics have been penned by Bichu Thirumala and Rajeev Allunkal. The camera works have been handled by Salu George. Sarkar Colony is a movie which will gel very well with the Malayalee audience as the story is very relatable and could remind one of his own life.