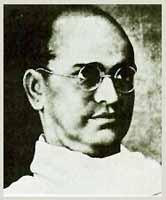 Vallathol Narayana Menon is a renowned poet who used to write poems in the Malayalam language, the local language of Kerala. He is also popularly called as Mahakavi meaning 'great poet'. He hails from a place called Chennara in Malappuram district of Kerala. He was born in the year 1878 and passed away in the year 1958. Vallathol spent his entire childhood and teenage years in Chennara itself. During this period also, he wrote many poems which became very famous later on. After almost 27 years, he shifted from Chennara to a small village place called Cheruthuruthi in Thrissur district which is currently also known as Vallathol Nagar.

Other than for his poems, Vallathol Narayana Menon is also famous for his contributions towards setting up the Kerala Kalamandalam in Cheruthuruthi. Due to his immense contributions to the Cheruthuruthi village, the place itself was renamed after him and is now called as Vallathol Nagar. He was also instrumental in the development of the Kathakali art form to make it reach the pinnacles of a show of Kerala culture. Once the Kalamandalam has been stabilized and great developments had been done to Kathakali art form, Vallthol Narayana Menon diverted his attention to other art forms of Kerala. He was immensely attracted by the beauty of Mohiniyattam dance form. Though it was a highly respected dance form in olden days, it had slowly started gaining a bad reputation as women of ill reputes began to bring the dance form at their homes. Thus, it was Mahakavi Vallathol who took the courage to reinstate the dance form by arranging talented tutors to teach Mohiniyattam to the students. Vallathol Narayana Menon has no knowledge at all in the English language. 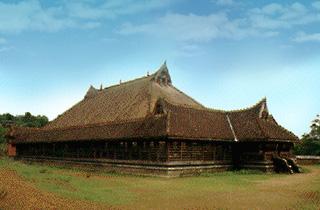 Kerala Kalamandalam was established in the year 1930 at Ambalapuram near Thrissur district and started operating from a single room with only one Kathakali maestro and four pupils. In the year 2011, it was recognized as a deemed university under the aegis of University Grants Commission (UGC). Currently, hundreds of students are being trained in the Kalamandalam by highly qualified faculty of experienced artistes. It attracts hundreds of tourists globally, apart form students from various countries including Japan in the east to South America in the west.

Vallathol Narayana Menon was titled as 'Mahakavi' after he wrote the poem Chitrayogam. In his noble poem, Ente Gurunathan (My Master), Vallathol has described Mahatma Gandhi (whom he adored very much) as a compound of Jesus Christ's self-sacrifice, Sree Krishna's righteousness, Gautam Buddha's non-violence, Sankaracharya's intellect, Harischandra's truthfulness and Mohammed's integrity. Vallathol's poem 'Bapuji' deals with the last hours of Mahatma Gandhi and his funeral. Some of the other people that Vallathol admired a lot included Rabindranath Tagore, Karl Marx and Sri Narayanaguru. About Sri Narayanaguru, Vallathol wrote 'Guru's birth is Onam to all, his wisdom the nectar. He is a full moon that does not wane'. Most of Vallathol's poems are in Malayalam language. Some other contemporaries who were famous for their writings during the same period as Vallathol included Kumaran Asan and Ulloor S. Parameswara Iyer. Many of Vallathol's poems have been translated to English, Russian and Hindi. Some of Vallathol's works have also been translated by the Germans to their language. In 1955, Vallathol Narayana Menon was awarded the Padma Bhushan title by the Government of India.

In appearance, Vallathol Narayana Menon was a tall and lean man, fair complexioned with long arms and legs. He had broad chests and broad shoulders. His face and features were handsome and he also had large expressive eyes. The best physical feature of Vallathol was his dignified and graceful presence which was enough to command respect and attention wherever he went. He never did any harm to anyone but always tried to help those who were in distress in his own possible way. He became a deaf man from the time he finished his translation of Valmiki's Ramayana that is, thirteen years after his birth. Though he had to struggle a lot due to his deafness, he never allowed this physical disability to hinder his ambitions and spirits to write more better poems. In this aspect, he was always a very cheerful and optimistic person.

In 1978, a new ship, which was built in Yugoslavia at the behest of the Shipping Corporation of India, was christened as M/V Vallathol in honor of Mahakavi Vallathol on the occasion of his birth centenary. This was done on the basis of a request made by the Kerala Kalamandalam authorities and with the concurrence of the government.

During a function that was organized by Malayalis in Madras, the prevailing Chief Minister Kamaraj was invited to attend the function as a chief guest. Mahakavi Vallathol was also invited for the function as a special guest. Vallathol was very punctual and came on time to get a seat in the front row. Kamaraj, as customary of politicians, arrived a little later. Meanwhile, the organizers of the function realized to their dismay that Vallathol had occupied the seat that was meant for the chief guest. The secretary was reluctant to speak to Vallathol about the matter, as he felt it would be difficult to explain the situation due to his deafness. A lot of confusion took place and finally, with a Herculean effort, they unearthed an equally decorative 'throne' for the chief guest in the nick of time. Thus, the problem was solved. The interesting part here is that the organizers did not know that even if they had managed to explain the situation to Vallathol, it was quite unlikely that he would vacate the seat of honor. It was not his nature to yield his place to anyone else.

Other contributions of Vallathol Narayana Menon

Vallathol Narayana Menon was also a Congress party worker. He was always actively involved in the Nationalist movements and participated in the all India conferences of the Indian National Congress (INC). Vallathol even rejected the honour that the British had wished to give him when the Prince of Wales made a visit to India. He rejected the honour in order to keep up with his freedom struggle for India.