Sri Narayana Guru was a social reformer of India as well as a Hindu saint who is worshipped by his followers even today. He is also known as Sri Narayana Guru Swami. He is one of the greatest social reformers of India. He attracted many followers with his fight for equality among the people. The Guru himself was from a low caste society called the Ezhava's who were very badly treated in the ancient times. These people were not only denied entry into the temples, but they were also forbidden from education and learning due to reasons such as untouchability and inapproachability. Among his followers, Sri Narayana Guru Swami was more fondly known as Gurudevan. As he had gone through the troubles that low caste people face, he understood the problem well and made it a point to see that some reforms are introduced to such kind of treatment. Swami led many reform movements in Kerala and fought against caste differentiation. He did all the possible things to make sure that each and every person, irrespective of his caste and creed, gets the right to freedom and equal treatment. It is his teachings that helped the people of Kerala to change their perspective of looking at people from low caste. This is the reason why Kerala has progressed ahead in this aspect compared to many other states in India. Sri Narayana Guru fought against all the injustice but in a non-violent manner. Infact, he is also known as a contemporary to Mahatma Gandhi because of his non-violence policy.

Sri Narayana Guru was born on August 22nd, 1856 in a small village called Chempazhanthi near Thiruvananthapuram district of Kerala. His father, Madan Asan was a farmer and his mother's name was Kutti Amma. Other than a farmer, his father was also a teacher who was skilled in Sanskrit language and used to teach the village folks about the Ramayana and Mahabharatha. While his father taught the villagers, Narayana Guru, who was called as Nanu in his younger days, also sat aside and listened to his father's teachings. Nanu's uncle, Krishnan Vaidyan was also a great scholar as well as an Ayurvedic doctor. Nanu learned about literature and many other things from his father and uncle. From such a tender age itself, Nanu used to fight back when his relatives used to taunt them for being from a low caste. He was a very god-fearing person too. During his childhood days, he used to visit the temple often and wrote poems and songs to sing to the Lord. He lost his mother at the tender age of 15. His teenage years passed by in helping his father and uncle to teach the village folks. Soon, his father realized that Nanu had to given more education as his ideologies and thoughts would be beneficial to the society. Thus, he was sent away from home to a great scholar called Kummampilli Raman Pillai Asan of Puthupally in Central Travancore. It was from this scholar that Nanu learnt everything that was needed to enrich his knowledge in Sanskrit, poetry, literature and drama. Even through his studies, he would teach at a near by school from where he gained a lot of respect and admiration to be titled as Nanu Asan (Asan means teacher). Due to parental pressures, Nanu was forced to get into marriage with a lady called Kaliamma. But the marriage was never meaningful as Nanu never had time to stay at home with his wife. He was always wandering around for more knowledge. Ultimately after his wife's death, Nanu became a proper Sanyasi. 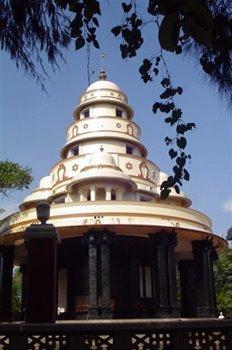 At the age of 23, he left everything and went into meditation and prayers with spiritual learning. It was after this meditation got over that the Guru began his revolutions against injustice and inequality. Many temples were established by Sri Narayana Guru which made no discrimination at all on the ground of caste or creed. Even people from non-Hindu background was allowed entry into his temples unlike many other temples which allowed only Hindus to enter. One of the most famous teachings of Sri Narayana Guru is 'One Jaati (caste), One religion, One God for Man'. He has written many literary works in Malayalam, Tamil and Sanskrit languages. There are schools and colleges in India which are named after this renowned sage. One of the notable followers of Sri Narayana Guru is Nataraja Guru who distributed the Guru's ideas and teachings to the western world also. The noble laureate Rabindranath Tagore has visited the Guru at Sivagiri ashram. Even the father of the nation, Mahatma Gandhi was an admirer of Sri Narayana Guru and the two of them have had a great face to face interaction discussing their ideologies and thinking which go on similar lines.

Sri Narayana Guru has founded many ashrams. The most important ashram is at Sivagiri near Kollam. It is located near the Varkala beach near Thiruvananthapuram district of Kerala. The place consists of the Samadhi of Sri Narayana Guru. Another famous ashram founded by the Guru is the Advaita Ashram at Aluva. Many important conferences have been held at this ashram. In 1911, the census report of Travancore declared the Guru as the National Saint. On 31st December 1999, Malayala Manorama declared Narayana Guru as the 'Malayalee of the century'. Recently, there has also been a film picturised on the life and teachings of Sri Narayana Guru. The film's name is Yugapurushan where Thalaivasal Vijay portrays the role of the Guru.

1. One Jaati (Caste), One Religion, One God for Man
2. Liquor is poison. Make it not, Sell it not, Drink it not.
3. Ask not, Say not, think not caste. Think only Gods.
4. All are of one self-fraternity such being the dictum to avow, In such a light how can we take life and devoid of least pity go on to eat.
5. Devoid of dividing walls of caste or race or hatred, We all live here in Brotherhood.
6. Progress through education, Strengthen through organization.
7. Love of others is my happiness, Love that is mine is happiness for others. And so, truly, deeds that benefit a man must be a cause for other's happiness too.
8. Grace, Love, Mercy - all the three - stand for one same reality - Life's star. He who loves is who really lives.
9. Whatever may be the difference in men's creed, religion, dress, language etc because they all belong to the same kind of creation, there is no harm at all in their dining together or having marital relation with one another.
10. Acts that one performs for one's own sake should also aim for the good of other men.