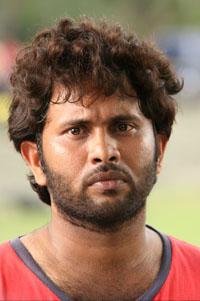 
Aju Varghese the new Malayalam film actor was born in Thiruvalla, a small town in Pathanamthitta district. He has completed his school studies at St.Thomas Convent Palakkad, Rajagiri High School Kalamasserry and Bhavans Adarsha Vidhyalaya. During his school days he has successfully participated in lot of dramas and skits for the school celebrations. Here he acted in various dramas and skits for the annual day celebrations. Later he did his schooling from Bhavans Adarsha Vidhyalaya, Ernakulam. Then he has completed his Bachelor's in electronics and communication engineering in 2006 from Hindustan Collage of Engineering, a Chennai based University. At the same time, after completing his studies when he was working associated with HSBC bank at Chennai, he has called by his college friend Vinneth Sreenivasan(the famous actor, singer and son of famous Malayalam actor Srinivasan) to play a role in his own directed film Malarvadi Arts Clubs it was the turning point of his life.