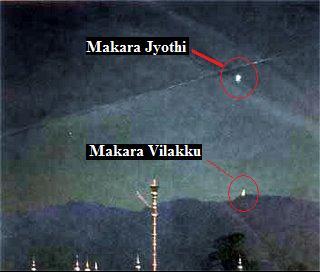 We all are familiar with the fact that Sabarimala in Kerala is a famous pilgrimage destination. As there are different districts in Kerala, our god's own country, the location of Sabarimala Lord Ayyappa Temple is in Pathanamthitta district. Lord ayyappa is the presiding deity of this temple. 2012 Makarajyothi festival is on 15 January. Every year this makarajyothi is considered to be an important event that is witnessed by large number of Sabarimala temple pilgrims. Majority of the people are aware of the fact that this Makarajyothi in Sabarimala Lord Ayyappa temple is held on the day of makara sankranthi, which is the first day of makaram month according to the Malayalam calendar 2012 in our Kerala.

The 2012 makarajyothi rituals begins with the sabarimala thiruvabharanam procession on 12 January 2012. The literal meaning of makarajyothi is light of Capricorn. After the thiruvabharanam procession reaches the sannidhanam, the pilgrims will not be permitted inside the Sabarimala Lord Ayyappa Temple until the adornment of the sacred jewels. The doors will be opened for the darshan only after sometime. At the same time, this Makarajyothi will be seen on the north eastern mountain side on Ponnambala Medu. There is a belief that Lord Ayyappa expresses himself as makara jyothi to bless his devotees. Another fact is that this makarajyothi festival marks the completion of the makaravilakku pilgrimage season of sabarimala.

The makaravilakku festival 2012 is marked with an event that is associated with malikapurathamma. It is believed that malikapurathamma who is ascending on an elephant, approaches the pathinettampadi and goes back to her residence. This usually happens after the makarajyothi. It should be noted that after this makaravilakku 2012, the guruthi pooja 2012 takes place. Actually guruthi pooja is an offering of water, chunnambu and turmeric powder given to the forest deities. On the last day of the 2012 makaravilakku season, the closure of sabarimala lord ayyappa temple takes place after the night pooja. Kalababhishekom will be performed to cool the deity. After that the idol of lord ayyappa, the deity of sabarimala lord ayyappa temple will be covered with holy ashes and a silk turban will be placed on the top of this idol. Apart from this, a stick and a japamala will be placed on the hands of this deity. There will be prayers and songs of harivarasanam (devotional song of Lord Ayyappa). There are several oil lamps in front of this idol. As each verse of the song is sung, the oil lamps are put off one by one. After this, the melsanthi exits the sanctum sanctorum by locking the doors. Do you want to know more about the arrangements made for sabarimala makaravilakku 2012? Then go through the following points.

We all know the fact that there will be heavy rush at the Sabarimala Lord Ayyappa Temple during the makaravilakku pilgrimage 2012. In view of this, arrangements including tight security have been deployed at the lord Ayyappa temple Sabarimala by the Travancore Devaswom Board and the Kerala Government. Several arrangements have been made by the Kerala water authority (KWA) to ensure the proper supply of drinking water to the Sabarimala pilgrims. Apart from this drinking water, food may also be supplied to the pilgrims. In order to meet the heavy rush of Sabarimala pilgrims, KSRTC will also conduct more bus services. Many of you may be interested to know the history or legend behind makaravilakku-makarajyothi.

There are different stories associated with makaravilakku-makarajyothi. One popular legend is that Ayyappa, after defeating the devil mahishasura, merged with the dharma shastha murti at the Sabarimala Lord Ayyappa Temple on the Makarajyothi day. This makarajyothi is considered as the star that appears on the sky during puja but makaravilakku is a jyothi that appears at ponnambalameddu 3 times on makar sankranthi day usually after the evening puja.