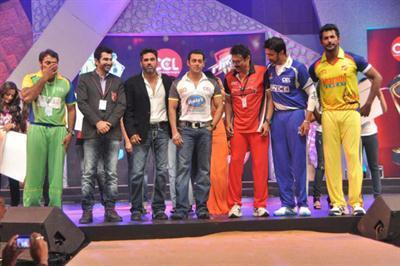 Celebrity Cricket League 2012 is the extravaganza when cricket and movie stars comes under a common platform. In 2011 the celebrity cricket matches were seen as a show full of excitement, while the 2012 edition of CCL has become a real contest with bat and ball. After the IPL matches, here it is the time of people to stick on to their TV sets to watch their favourite stars performing on field. This season of CCL is becoming more attractive after few matches.

So this cricket matches has become not only giving an opportunity for movie stars to display their talent on field but also creating the game much popular to the unknown. Super stars representing various movie industries have come together which includes bollywood stars and actors of other regional languages too. The brand ambassadors of all teams are popular actresses who are on the field to cheer their favourite team.

The organizers of CCL has brought up an unique opportunity for those who stay away from TV sets but want to watch it online. According to reports, the television rating of these matches has higher rating than International cricket matches making the game much popular among the mass. The CCL 2 final will be played between Chennai Rhinos and Karnataka Bulldozers on 12th February 2012. So don't take any more time as you can watch the match online streaming here.