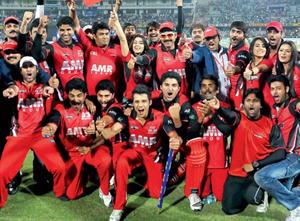 AMMA's Kerala Strikers was beaten by Telugu Warriors for 9 wickets in the 8th match of Celebrity Cricket League. The match was played on the ground of Bengaluru Chinnaswamy stadium. The Mollywood team was completely outplayed in all the fields of the game. Aadarsh scored a match winning half century for the Telugu Warriors in 45 balls. Aadarsh and Nandakishore are the architects of the Warriors' victory.

The toss was won by Telugu Warriors and they chose to field. Kerala Strikers scored 94 for 9 wickets in 20 overs. Opening batsman Nivin Pauly was the top scorer for the Kerala team with an unbeaten 46 from 64 balls. Nivin and Rajeev Pillai made 39 in 7 overs in the opening wicket. Then Rajeev Pillai got out for 16 in the first ball of the 8th over. Then it was a rally of the Kerala batsmen to the pavilion. Unni Mukundan, Vivek Gopan, Saiju Kurup and Bala returned without adding runs to the total. Nivin Pauly did not get the much needed support from anyone. Bineesh Kodiyeri, Manikkuttan and Munna could not spend much time in the crease. Prajod Kalabhavan showed some aggression with a quick 12 though, he got out trying for an unneeded run.

Tarak Ratna and Aadarsh opened for Telugu Warriors. Unni Mukundan and Manikkuttan opened bowiling for the Strikers. Tarak and Aadarsh made 32 in the first wicket. Aadarsh was dropped twice, first by Unni in the ball of Saiju Kurup and later by Bineesh in his own ball. That turned out to be the turning point of the game. Soon, Tarak was caught out on 7 by Prajod Kalabhavan in the ball of Vinu Mohan. But Tarun and Aadarsh led the Tollywood team home in just 15 overs without any loss. Tarun and Aadarsh stood not out at 27 and 52 respectively.

Mohanlal, the Kerala Strikers captain did not play the game. Rajeev Pillai led the team in the absence of Mohanlal. The match had a modest crowd. Mohanlal was present with his wife Suchitra. Telugu Superstar Venketesh was there to support his team. Actors Radha, Sumalatha were present as well. National cricketer Sreesanth was also there to support the Kerala Strikers.