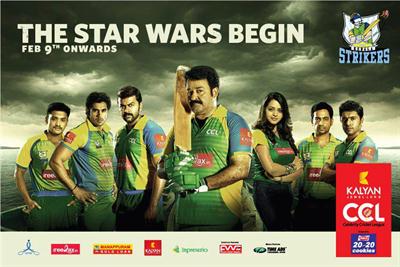 Are you ready to watch your favourite movie stars entertaining you with bat and ball in the field? So the exciting days are back again which would bring all yes to lend their eyes for a month to witness extraordinary cricketing season along with top actors in India. With all arrangements set for CCL 2013, it would be interesting to known about the inauguration scheduled to be on 9th February. Shouldered by director Priyadarshan, few hours of inaugural event will be too special for the viewers who would get a rare chance to witness the show.

After the inaugural match between Chennai Rhinos and Karnataka Bulldozers, the official inauguration will start at 6.30 PM in Jawaharlal Nehru Stadium Kochi with all teams present during the occasion. Minister K B Ganesh Kumar will meet the players of the team. The flag hosting and inaugural function will be spread only for half an hour with a second match between Kerala Strikers and Mumbai Heroes to get followed. The major attraction of the day will be the presence of bollywood hunk Salman Khan who would be supporting his team against the match of Kerala Strikers. Actors like Venkatesh, Vishal, and Surya along with brand ambassadors would grace the function. The 2nd season of CCL played at Kochi witnessed gigantic spectators which made the organizers to mark the city as the inaugural venue.

Amma Kerala Strikers lead by Padmashree Lt. Col. V. Mohanlal will have 8 new players added for the 2013 edition. The brand ambassadors of the team would be Bhavana and Mamta Mohandas. Indrajith will serve as the vice-captain.