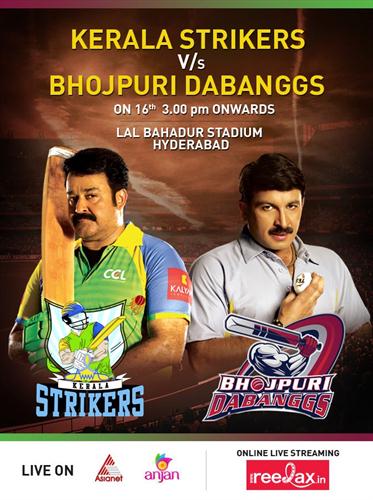 The 2013 edition of CCL started with a bang leaving all the excitement and thrills to be enjoyed by the millions of fans whom were keeping an eye on each moment of cricketing action. The Celebrity Cricket League Season 3 (CCL 3) which was started on 9th February 2013 at Kochi Jawaharlal Nehru Stadium has rose up to expectations with all teams putting professionalism to the game.

After majestic wins, both Kerala Strikers and Bhojpuri Dabanggs are on the move the clash on the field set at Hyderabad. The match to be played on 16th February 2013 will be a visual treat combined with fireworks in the stadium. For Bhojpuri Dabbangs, it was a memorable day getting an edge over defeating the defending champions Chennai Rhinos. On the other side Amma Kerala Strikers crushed Mumbai Heroes by 3 wickets

Riding on the shoulders of the batting skill of Rajeev Pillai, Sumesh B and Vivek Gopan, Kerala Strikers do have a long line of bowlers who are able to turn down the match to their side. Led by Manoj Tiwari, the Bhojpuri Dabanggs has an array of players including A Ojha, U Tiwari and A Sharma who can hit the ball outside the stadium. So catch all the actions for the match to be played between Kerala Strikers and Bhojpuri Dabanggs.

The CCL T20 match between Kerala strikers and Bhojpuri Dabanggs to be played at Lal Bahadur Shastri Stadium Hyderabad will be telecast live on channels like Asianet and Anjan on 16th February 2013 from 3.00 pm onwards. If you are out of home and want to enjoy the excitement and thrills, don't miss to watch the match live streaming online on http://reelax.in/live.