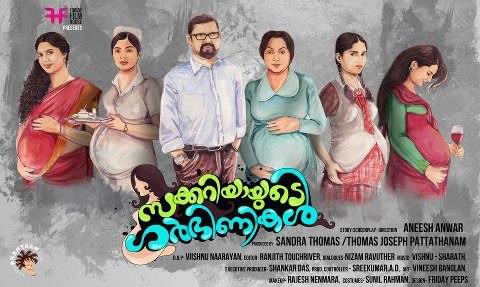 It's much interesting to go through the multiplicity of themes selected by malayalam film makers for their ongoing projects. Youngsters who land in the industry do carry a passion for movies in heart contributing their best on time. 2013 seems to be a golden year for the film industry with around 160 plus movies under pre production making 200 in total to get released.

Adding one more to the line of movies to hit theatres in 2013 will be Aneesh Anwar's 'Zacha¬riayayude Garbhinikal'. Bollywood sensation Vidya Balan had made much hype donning the role of a pregnant lady in Kahani, it would rare occasion where the five lead ladies would play the characters of pregnant women.

The movie rolls around the story of the lives of five women between the age group of sixteen to fifty-five who get pregnant and wants to get comfort with the treatment provided by Dr. Zachariah. Lal who had played a number of matured characters is back in a powerful character as Dr. Zachariah a gynecologist treating the five pregnant women. The roles of 5 pregnant women will be played by Nazria Nazrin, Rima Kallingal, Sandra Thomas, Nafisa Ali and Meena. Zacha¬riayayude Garbhinikal' marks the comeback for Nafisa Ali and Meena after a small interval.

It's about the lives of the five pregnant women who are being treated by Lal, a busy doctor who wants to ensure safe delivery without going for caesarean. Nazriya a young girl school girl of 16 years who gets pregnant wants a safe delivery. Rima Kallingal a nurse working in Zachariah's hospital pairs opposite to Aju Varghese. Sandra Thomas plays the role of a housewife who is married to an aged man but had involved in an extramarital affair too.

Nafisa Ali who dons the role of a nun creates a controversy after giving back her robes for maternity. Meena will be seen as Lal's wife who is looking forward for a child after remaining childless for long period. The movie which is loaded with the elements of entertainment would run through five different tracks simultaneously making each shot interesting.