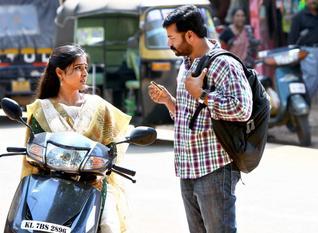 Philips and the Monkey Pen!!!!!!! How the name sounds? The new generation film makers in malayalam are too wise in selecting the titles for their respective movies. The title of a movie plays an important role in grabbing the attention of the viewers much before its release.

So get ready to know more about 'Philips and the Monkey Pen', the directorial debut of Rojin Philp and Shanil Mohammed. This witty movie which centres on the life of children will tell the tale of a school boy and his friends.

Ryan, who studies in 5th standard, is very week in mathematics who fails to do the homework regularly. Jayasurya and Remya Nambeesan would be donning as the parents of the boy. He is followed by five friends including his little lover. The movie travels through various funny situations created by the kids.

More interestingly, 'Philips and the Monkey Pen' is expected to become a unique platform for the children of celebrities including the actor Indrajith's daughter, Babu Antony's son and Suraj Venjaramood's son to play lead roles. The cast of the movie is currently at the initial stage with talk are going on to finalize the star children. Produced by Sandra Thomas, the movie will have the music scored by Rahul Subramaniyam, the brother of Remya Nambeeshan.

As children centered movies are rare in malayalam, 'Philips and the Monkey Pen' would be something special for movie lovers who wish to watch the funny moments in the life of kids. Being the initial project of Rojin and Shanil, the duo didn't want to focus it on hero-oriented subject.

After sharing screen space in Husbands in Goa, Jayasurya and Remya would give life to prominent characters in the movie. 'Philips and the Monkey Pen' will be start rolling from May 2013.