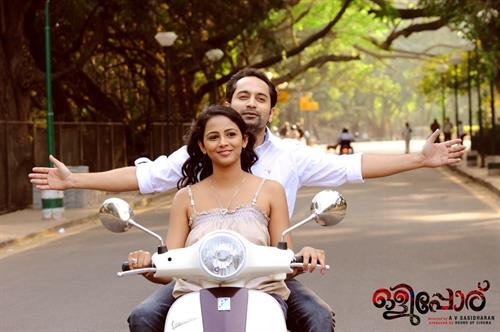 Fahad Fazil, the most wanted young actor in malyalam is on a high fly mode with a number of projects standing in line for him. Already 4 movies of the actor have reached theatres in less than 80 days. His presence in Annayum Rasoolum, Natholi Oru Cheriya Meenalla, Red Wine and Amen were much enough to get back the love of the viewers while the actor is gearing up for few more movies to be seen in majestic roles.

While receiving good response from theatres about Red Wine and Amen, humbled by the success Fahad is on the way to excite the movie lovers with a unusual theme, but relevant in the presence scenario. Fahad's next rolling out will be 'Olipooru', directed by A V Sasidharan which is flovoured with elements of suspense till the end. In this movie Fahad dons the role of an ardent blogger who is known around the globe through his blog 'Olipoorali'. Even though his presence is much felt in the virtual world, no one knew much about him.

Adding more excitement to the active bloggers, an exclusive show under the coordination of the event was the man behind the screen 'Olipoorali' along with few other youngsters who were active in blogging and social networking sites. With all arrangements set for the show, all eyes were on the arrival of the 'Olipoorali'. The other coordinators who used to write blogs under the names of Clutch, Gear, Break, Vani, and Pachakuthira found themselves in dilemma as Oliporali kept him from the scene.

As the other bloggers had zero knowledge about 'Oliporali', they decided to know more about him. The curiosity to know the whereabouts of the unseen blogger makes them aware that, the person is whom they are searching is much more than their imagination. Rest of the story travels through real excitement while unveiling the suspense.

A V Sasidharan, known for directing various documentaries would like to keep his foot strong in the movie industry with his directorial debut 'Olipooru'. The movie will feature Fahad in two novel and different faces. Much interestingly Fahad would lend his sound for a song in the movie. Tamil actress Subhiksha would pair with Fahad while Kalabhavan Mani, Talaivasal Vijay, Sidharth Bharathan, and Zareena Wahab will keep their presence alive in supporting roles.

The movie is being produced under the banner of Round UP Cinema. For the script of P N Gopikrishnan, director A V Sasidharan has given full dedication to keep the theme rolling. The movie will keep the audience on nails while the music of John P Varkey would keep refreshing.