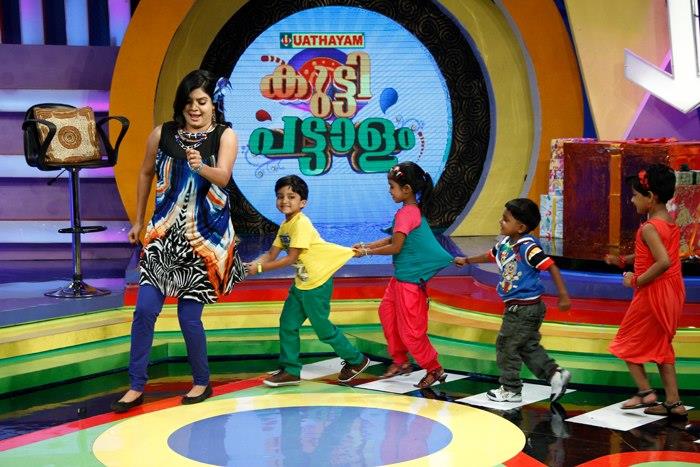 Surya TV always known for its telecasting innovative programs is not ready to comprise other than delivering enjoyment to the viewers. With a verity of programmes including fresh movies, reality shows, the channel has already took the audience with their brand new show exclusively for the kids.

Titled as 'Kutty Pattalam' anchored by Suby Suresh, the programme is one of the highly rated TV shows which give a perfect platform for the kids to express their naughtiness and innocence. Children between the age of 3 and 8 are given a chance to feature in the kids show & become a star in a day.

Suby Suresh, the anchor much familiar among the small screen audience with her presence in various programs including 'Cinemala'. Suby who had proved her mettle behind the screen, was chosen to anchor the program even though she was reluctant to do it with her inexperience in handling the kids.

With participants aged between three and eight, Suby enjoyed each moment of the shooting with the kids. Each episode keep the interest at its peak as the kids opens their innocent minds when questions are asked.

Even the length of the show is half an hour, the shooting for an episode with continue for three to four hours as some of them play before the camera. Telecast on Surya TV on all Sunday at 7.30 p.m, Kutty Pattalam is a funny chat show which one can enjoy with his family. With the parents sitting in the studio, each kid is asked few questions which he/she would answer which bring the funniest part.

As a segment in the episode, kids were asked to identify the person shown in photo. The response was too funny which bring out the innocence in the children. So don't miss any episode of the program and enjoy with your kids.