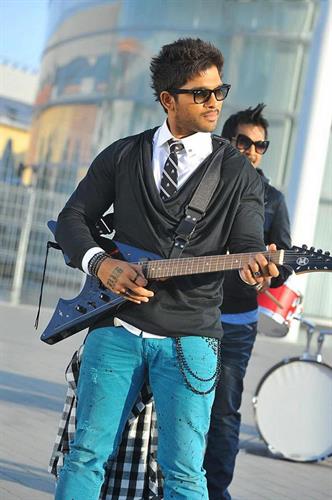 Allu Arjun is the only telugu actor who has a long line of fan followers in Kerala. There is not such a celebrity who had deepened into the hearts of the movie lovers in Kerala. Being a household name, Allu is affectionately called as 'Mallu Arjun'.

Starting from Arya, it was Khadar Hassan who introduced the young charming actor Allu Arjun to the malayali audience who well accepted him and kept close to their hearts. His unique way of acting, dancing and dialogue presentation truly added extra energy in the youngsters. Being the heartthrob of millions, Allu Arjun has created a space in the hearts of movie enthusiasts who well accept each of his movies with delightful hands.

After Arya, Bunny, Badrinath and Gaja Paokkiri, the man of mass is gearing up to enthrall the spectators with Iddarammayilatho. Slated to release on 10th May, the movie will have a malayalam version which will be releasing in the first week of June 2013. Iddarammayilatho which means 'With Two Girls', is directed by Puri Jagannadh featuring Allu Arjun, Amala Paul and Catherine Tresa in lead roles.

Iddarammayilatho is a much hyped movie being produced by Bandla Ganesh under the banner of Parameswara Arts. Bandla Ganesh Babu who found to be in cloud nine after the grand success of Gabbarr Singh has cashed a huge amount for Iddarammayilatho while the shooting of this romantic entertainer was carried out in Spain in Bangkok. The movie revolves around an Indian youngster who falls in love with two young girls while staying in Spain.

Puri Jagananath is not ready to give compromise other than giving a stylish look to his movie. It is known that Allu Arjun would be appearing in lavish looks spotting in 60 different costumes. The highlights of the movie are just to come. Amol Rathod, popular cinematographer has lend his support by zooming into the exotic locations while Allu would dance to the steps choreographed by Ganesh Acharya who had sizzled behind the screen working for Bodyguard, Singham and Omkara. As per the industry sources, Allu Arjun will apply some unique dance steps which would be visual treat for dance lovers.

Another major attraction of the movie will be the breath taking action sequences set by Hollywood stunt choreographer Kaeche Kampakdee, the man behind action movies like Blood Sport 2, Ong Bak 2 and Sanctuary. Being an expert in Muay Thai martial art, Kaeche was paid Rs 2 Crore for the six action sequences. With Kaeche Kampakdee donning the master of action in Iddarammayilatho, it could be the best action films in Allu Arjun's career.

With the schedule in Spain wrapped up, the team will be moving to Hyderabad for the next schedule. With music set by Devi Sri Pradad, the much awaiting audio release of Iddarammayilatho is slated for the 3rd week of April. So get ready for a high voltage Allu Arjun movie which could dazzle your minds.