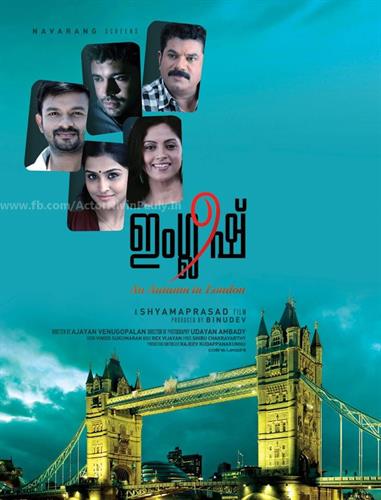 Film maker Shayamaprasad is back in his role behind the camera to tell a tale of distinct individuals and their families living in a foreign land. Set on the back drops of London, the movie 'English' deals with the life of the Malayalee Diaspora.

Shankardas (Jayasurya), a Kathakali artist reaches London due to certain circumstances. Even though he wishes to return back to his land, as with some difficulties he fails to return back. Sibin Kuriakos (Nivin Pauly), born and brought up in Gulf is an IT professional works in London and enjoys life at its maximum. Gauri (Remya Nambisan) arrive at London to live with her husband.

Joy (Mukesh) a business man who runs a corner store in London, lives with his wife Saly (Sona Nair), children, his mother and brother.
Dr Ram (Murali Menon) and his wife Saraswati (Nadiya Moidu) are another family who resides in London. Saraswati who belongs to a traditional Brahmin family, finds very difficult to adjust with the lifestyle in London.

The comfort and problems face by the families are family frames the rest of the story. For the story of Ajayan, Syamaprasad has penned the script. Ajayan Venugoal, a Malayali techie living in New Jersy has earned named as the script writer and co-director of the popular situation comedy (sitcom) Akkara Kazhchakal which was based on the life of Malayalis in the United States. Working with Syamaprasad, Ajayan looks for a bright future as script writer in malayalam movie industry.

The lyrics of Shibu Chakravorthy have been beautifully tuned by Rex Vijayan who has rendered his hands for the music of the movie. Shot completely at London, 'English' is produced by Binu Dev under the banner of Navrang Screens. Udyan Ambady has cranked the camera zooming the excellent places of United States. It is expected that, the movie will get released during the Vishu festival season.