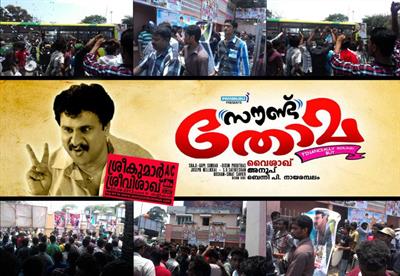 With around 50 plus movies releases in three months and around 200 movies under production, malayalam movie industry is gearing up to take the entertainment world to the next phase. The entry of new talents is always welcome but many questions too arise at this point.

In the meantime, as the film makers are much confident about the return of the production cost, the quality of movies would come down. With satellite rights, remake and overseas rights play a significant role; film makers are not much worried about the performance of their projects in the theatres.

As entertainment channels in Kerala are competing to keep the movies under their arms, the producers are not thinking of the risk in cashing for the ventures. Considering the fact of satellite ownership, the top 4 malayalam entertainment channels like Asianet, Surya, Mazhavil Manorama and Amritha are on real time battle.

The much hyped movie Sound Thoma tells the tale of a guy who has a cleft lip and defective voice who falls in love with a young girl who owns a melodious voice. Produced by Anoop, the screenplay of the movie was handled by Benny P Nairambalam. Background score and soundtrack were composed by Gopi Sundar while the cinematography was safe in the hands of Shaji Kumar.