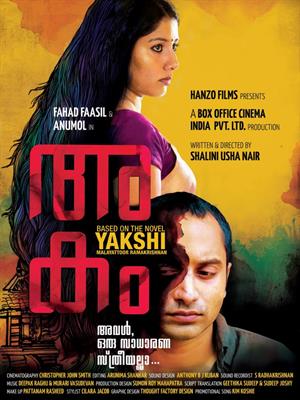 Based on 'Yakshi', the novel written by Malayattor Ramakrishnan in 1967, K S Sethu Madhavan's who made a movie in 1968 with the same title featuring Sathyan, Sharada and Adoor Bhasi is regarded as the first psychological thriller in the history of Malayalam cinema. Having a wonderful psychedelic experience, the author was treated with high regard for his unmatched talent and writing skill. Yakshi was also shown in BBC's Off the Shelf program as 12 episodes.

After 4 decades, a young director is ready with a loose version of the novel. Titled 'Akam', the movie written and directed by Shalini Usha Nair is a contemporary adaptation of a classic that had been embedded into the mind of malayalees. The movie feature Fahadh Fasil, Anumol K, Prakash Bare, Shelly, Anuja Krishnan, Giridhar, Sajitha Madathil donning prominent roles.

The movie is themed around a Srini(Fahadh Faasil), a young architect who finds happiness with his job and beautiful girlfriend Thara. An accident which happened in his life was much enough for Tara and his friends to leave him. Being a shattered person losing his confidence, Srinivas withdraws into a shell.

During the juncture he meets the beautiful Ragini(Anu) who was willing to accept him in spite of his baleful appearance. After getting married, doubts creeps up into the mind of regarding the identity of Ragini getting confused whether she is human. Rest of the story goes to the next phase which makes the movie interesting.

The music of the movie is set by Deepak Raghu and Murali Vasudevan. Christopher John Smith served as the DOP; Pattanam Rasheed took charge of makeup while sound design was by Antony Ruban. With its commercial release slated on 26th April 2013, the movie will be released in major theatres in Kerala.