Are you waiting for the release of the movie ABCD? For those who can't wait to see the most expected movie of Dulquer Salmaan, it will be a good news that the movie is going to be released on this Friday. Many of you will be eager to know about the nearest theaterers in your city and might have already started to search the theater list Online to watch ABCD Malayalam Movie. Spiderkerala will soon update the list of theaters which will play ABCD.

The release of ABCD Malayalam Cinema will be a treat to the fans of the star because the film is all set to release in all major cities in metro includes Bangalore and Chennai. The movie will soon release in gulf countries too. Keep in touch with Spider kerala to get the show times and theater list of ABCD in Dubai, Abudhabi, Sharjah and other gulf countries.

ABCD is the second movie of the director Martin Prakkat whose debut film, Best Actor, with Mammootty in lead role was a big hit. In his second movie, he is directing the son of Mammootty, Dulquer Salmaan. The film is getting high expectations in the movie town since the release of the song Johny Mone Johny in youtube. The song is already a hit and and has the capability to make us to watch the film. 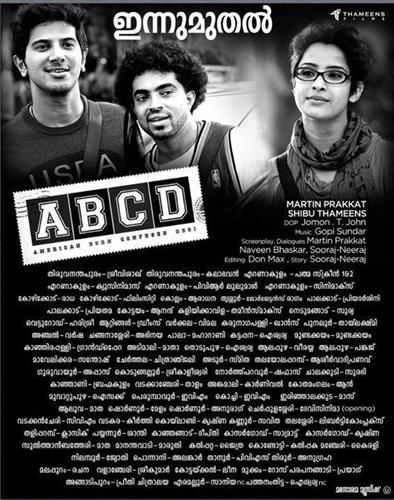