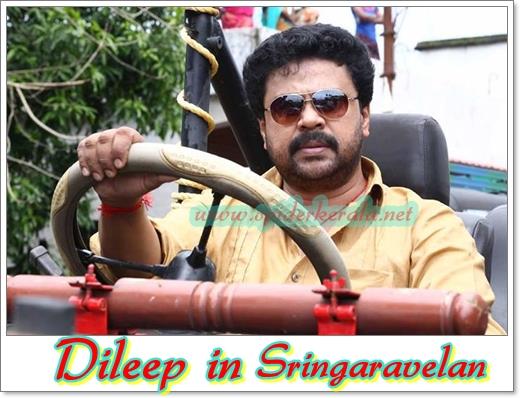 How about enjoying this Onam without tasting the sweetness of a Dileep movie? Actor Dileep who knows the pulse of the malayalam movie lovers is gearing up to entertain with his latest flick directed by Jos Thomas. Titled 'Singaravelan', the movie is currently on going in various locations set set at Palghat, Pazhani, Pollachi and Ottapalam.

The pooja of the movie was held on 3rd June with the presence of Dileep, Lal and Joy Mathew. Scriptwriters Udaya krisna - Sibi k Thomas, known for their innovative style of telling a tale has penned an interesting theme which is set on the back drops of affluent scenic beauty of Palaghat.

The story of the movie pools into the life of a weaver's son played by Dileep who aspires to become a rich person. Even though he tries to gain money by several methods, finally he realizes that his dream can be achieved only by getting married into a wealthy family. The movie creamed with humour will take the audience to the next level which would tickle their funny bones.

Scripted by Udaya krisna - Sibi k Thomas, 'Singaravelan' will also mark the reunion of the team which had delivered the blockbuster 'Mayamohini'. The movie 'Mayamohini' which created ripples in theatres became the highest grosser at box office. Vedhika Kumar who has proved her onscreen acting brilliance through other south Indian language movies is making her way in malayalam romancing Dileep.

Donning the character role of a fiery weaver woman, Vedhika who is excited to work a respectful team which had done wonders with "Mayamohini'. Vedhika who keeps a strong vision in choosing projects, had watched the blockbuster Mayamohini and enjoyed it at its best. Not but the least Vedhika will also be see romancing heartthrob Prithviraj in is tamil movie Kaaviya Thalaivan directed by Vasanthabalan. She is also receiving more interesting offers from Malayalam itself.

Udayakrishna - Siby K. Thomas, the most wanted and highly paid scriptwriters in malayalam has delivered their signature touch working behind the screen for many blockbusters and hit movies. After getting success credit for movies like Mattupetti Machan, Udayapuram Sulthan, Dhosth, C.I.D. Moosa, Runway, Thuruppu Gulan, Twenty:20, Pokkiri Raja (2010), Christian Brothers, Mayamohini , Mr.Marumakan and Kammath & Kammath, Uday and Siby has set yet another plot with 'Sringaravelan' which can bring box office success.