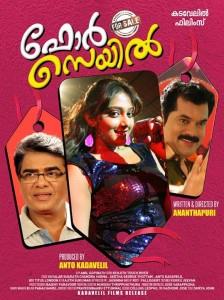 With doors wide open for new film makers to show their mettle on screen, those passionate in building a career is gearing up to helm projects for the movie enthusiasts. Yet another movie is getting ready to reach theatres after the final cut. Titled 'For Sale', the movie directed by Satish Ananthapuri will feature Mukesh, Saikumar, Vijaya Raghavan, Kadhal Sandhya and Aishwarya in lead.

'For Sale' pools into the life of a family and some interesting incidents revolving them. Joseph (Saikumar) is a business man who runs an advertisement firm. Joseph is addicted to liquor while his wife Achamma (Aiswarya) also shares the taste of it with him. Diana (Kathal Sandhya) and Lisa (Natasha) are their daughters with Lisa keeps modeling as her profession.

Lisa's earning from modeling keeps the family survive. She is a popular model working with the ad firm Sayanora run by Achayan (Vijayaraghavan). Prathapan (Mukesh) who is also known as Guruji handles the daily activities of the company. Due to some unavoidable circumstances, Diana had to go for modeling as a substitute for Lisa. That was a turning point in the life of Diana who rose to fame leaving Lisa wrecked behind her profession. Rest of the story takes the movie to the next phase unfolding some events which would keep the audience intact.

The movie leaves a message to the society which exposes the influence of the lifestyle of parents in the character formation of children. The ill effects of alcohol in society and how woman is seen a commodity by the society is being depicted here. For the lyrics of Vayalar Sarathchandravarma, Anto Kadavelil and Geetha Thottam the tunes are set by Titus Mathew.