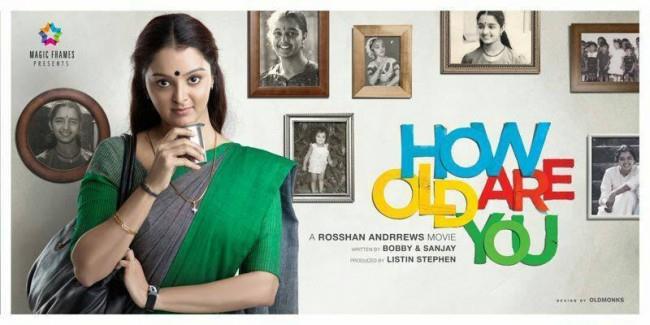 While the malayalam movie enthusiasts are eagerly waiting to know about actress Manju Warrier's comeback movie 'Man Friday', as a surprise came the first look poster of another movie featuring her. So, now it's much clear that Manju would make her presence in 'How Old Are You', an upcoming malayalam movie directed by young film maker Rosshan Andrrews.

The movie which starts Kunchacko Boban in lead will be produced by Listin Stephen under Magic Frames who is standing at the peak of his career. After being credited to be the producer of 'Traffic', 'Chaappa Kurish', and 'Ustad Hotel', Listin has spend money for tamil movies 'Chennaiyil Oru Naal' and 'Pulivaal', which are the remake of 'Traffic' and 'Chappa Kurish' respectively. 'How Old Are You' is blessed with the presence of Bobby – Sanjay who would lend their support scripting for the movie.

Bobby – Sanjay the sons of the actor Prem Prakash stepped into the industry scripting for the movie 'Ente Veedum Appuvinteyum'. They already has made their presence in the hearts of movie lovers delivering fragrance through their script work for 'Note Book', 'Traffic', 'Casanovva', 'Ayalum Njanum Thammil' and 'Mumbai Police'. It is also reported that Bobby and Sanjay would also be scripting for Rosshan's 2014 project 'Guinness Gilbert' featuring Dileep in lead.

After the box office record breaker 'Mumbai Police', Rosshan would be joining with Bobby and Sanjay for the 4th time with 'How Old Are You' which would also mark the return of Manju Warrier on silver screen. Manju has already announced her return on big screen has lent her face for a couple of advertisements for Kalyan Jewellers. Just recently, Manju has staged the classical dance performance in memory of Mullasery Rajagopal at Calicut.

So get ready to welcome Manju Warrier, the queen of hearts who is making her return on silver screen after 14 years. After the final cast and script, the movie will start rolling in 2014.