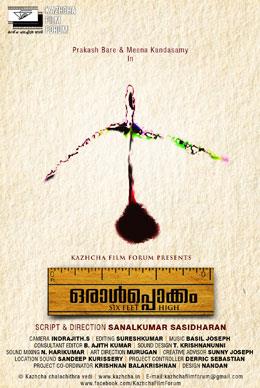 Sunil Kumar Sasidharan who known among his friends circle and fan followers as a film maker with an extra bone is gearing up to helm his first feature film. After winning hearts of millions for his short ventures like 'Wonder World', 'Parole' and much acclaimed 'Frog', Sunil is making his entry into the film industry with 'Oraalppokkam'.

This movie would be collective effort aiming to give a global outlook. Moving away from the traditional method of narrating stories, Sunil Kumar wish to explore the possibilities of making films giving a poetic and magical touch which would give an extra natural experience to viewers.

Even though an unusual, the story of the movie is an honest man-woman relationship which is being planned to shoot in the flood-ravaged Kedarnath. Having dialogues in Tamil, English, Hindi and Malayalam, this love story is creamed with emotions, imagination, phantasm and strange plane. Mahendran (Prakash Bare) and Maya (Meena Kandasamy) are two individuals who wish to enjoy life as with having no bondage. After their lovely days of acquaintance, the duo comes together for a live-in relationship.

Mahendran and Maya kept two conditions which would bring strength in their life. Restrictions free in the way and not to have off-springs were decided to be followed. As Mahendran deliberately asserted his masculine independence on Maya, the five year long relationship comes to an end. This breakup made Mahendran to follow various women and even passionately immerses in intoxication too.

After days of desertion, as a surprise Mahendran gets a call from Maya. She talks with him and shares about her current location, Kedar Nath in the Himalayan valley. Mahendran was shocked to watch the iridescent images of landslides and destruction. Watching the nature's dance over death, Mahendran redials the number of the last call. Failing in his act, Mahendran decides to take a journey to Kedarnath with aspiration finding answer to his thoughts.

Ilavenil Meena Kandasamy, a poet, fiction writer, translator and activist based in Chennai who dons the character role of Maya couldn't hide her excited after reading the script. As the script was refreshing, Meena wished to live the role which could explore her acting skill. Prakash Bare, the lead actor is well known as an artiste, producer and film maker has lend his face for more than 10 malayalam movies including Sufi Paranja Katha, Janaki, Ivan Megharoopan and Papilio Buddha.

Bikramjit Gupta and Krishnan Balakrishnan will also be seen in prominent roles. Indrajith S who has shown his mettle would wield the camera. Basil Joseph known for unique style of composing music will lend his hands to set the tunes. The movie would start rolling from 17th November. Presented by Kazhcha Film Forum, the low budget movie 'Oraalppokkam' will be produced by the contribution of well wishers.