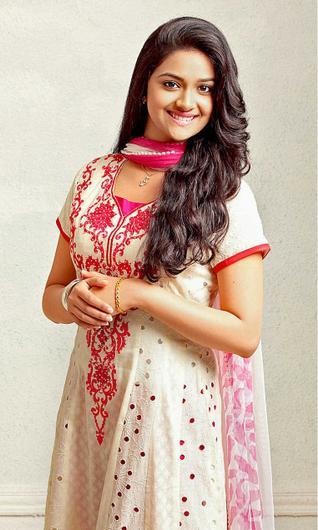 Keerthy Suresh, who has stepped into the malayalam film industry with Priyadarshan's 'Geethanjali' is gearing up to make her presence alive on the silver screen. Keerthy, who is the daughter of producer Suresh Kumar and yesteryear heroine Menaka, will play the lead role in Aneesh Kuruvilla's 'Kappa Pappadam', a romantic entertainer. She would be see as the heroine opposite to young sensation, Fahadh Faasil.

Prathap Pothen, Parvathy Menon, Raveendran, Bhagath Manuel, Anoop Chandran, Nadu, Manikandan, Lakshmi and Sunil Sukanda would give life to other prominent characters in the movie. The movie scripted by Y Y Rajesh will be produced by Raju Mathew under the banner Century films. With locations set at Thenkashi, Bangalore and Kochi, the movie is expected to start rolling soon.

Aneesh Kuruvilla being a highly dedicated film maker has shown his talent behind the screen especially in telugu film industry. The young man who is ready to invest 24 hours to bring his dream alive would create magic in mollywood too. His previous venture 'Ko Antey Koti' was a pulpy crime comedy which was truly a dedication to his favourite filmmakers.

Aneesh and his team who had worked the constraints of a limited budget making 'Ko Antey Koti' received a huge round of appreciation from the movie enthusiasts. The young generation loved the movie and the shows ran to packed houses. Even though his debut film 'Confessions of a Filmmaker' and 'Avakai Biryani' were not impressive, the young man learned a lot especially the wrong side of setting frames.

Keethy, is excited to play the lead role in 'Kappa Pappadam' pairing with Fahadh. The young talent is looking forward for the release of his debut venture 'Geethanjali' which will have Mohanlal playing the psychiatrist named Dr.Sunny. 'Geethanjali' is one of the anticipated movie which is creamed with humour and suspense.

Meanwhile Fahadh Faasil is shuttling from location to location to complete his committed projects. His upcoming movies include Oru Indian Pranayakatha, 1 by Two, Cartoon, Antichirst and Shivaganga Cinema Factory.