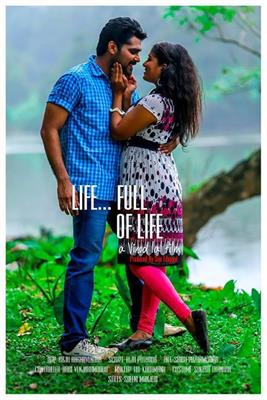 P M Vinod Lal's directorial debut 'Life Full of Life' is currently undergoing the final stage of its production. This movie would also mark the acting debut of a couple of new faces. 'Life Full of Life' scripted by Niju Puthoor and Manu Shonoor, this movie will focus on a family oriented subject which could keep the audience intact.

Haneesh Khani and Vaiga will be seen in lead roles while Devan, Vinuvai, S Mamukooya, Kuchpreman, Shaiju, Asees Shaukath Kooradu, Jayachandran, Vaijayanthi, Urmila Unni and Afsath will 'Life Full of Life' is being produced by Siju Edappal under the banner Rani Cine Movies. With location set at Nilamboor, this movie would reach theatres after its final cut.

Haneesh Khani who made his onscreen debut with Nissar's Platform No 1, is excited to get impressive roles in back to back projects. Haneesh who is concentrating more to improve his acting skill is too much interested to try a variety of roles.

After lending his face for movies like 'Village Guys' and 'Nayana', the actor is currently donning a prominent role in 'The True Story' alongside Priyamani.

With a month and a half remaining for the end of the year, more movies are under preparation expecting to entertain the audience. Along with a number of big budget projects, a long line of movies helmed by young film makers would reach theatres in 2014. With doors wide open for new directors, youngsters are making experimentation keeping in mind the new generation movie lovers.

Most of them are ready to travel through their own way which could stand unique. A handful of youngsters who have proved their mettle through short films are one the move to show their skill on the big screen too. So get ready to enjoy the visual treat to be offered by the path breaking film makers.