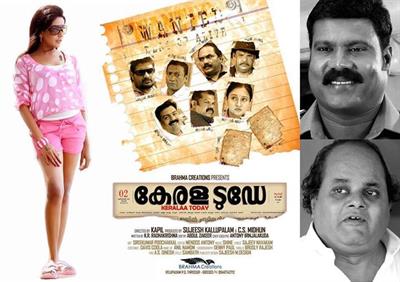 The arrival of a bunch of young film makers into the malayalam film industry has created excitement among the movie enthusiasts. The innovations made by these youngsters in front and behind the camera have changed the face of film making in Kerala. Yet another youngster keeping a passion over movies is enjoying his time in the shooting location directing the actors.

Kapil Chazhoor who has worked as an associate for various movies is helming his independent project titled 'Kerala Today'. The movie scripted by K.R.Radhakrishna raises voice against the current present social setup which is ruled by violence and rules created by the criminals. Maqbool Salmaan and Iti Acharya will don the lead roles in the movie.

This movie is produced by Sujeesh Kallupalam and C.S Mithun under the banner Brahma Creations, the production house based at Thrissur is known for their presence cashing for movies and television serials.

Kerala today pools into the various social issues formed inside the state and keep the young under a perplexing situation. It also zooms into contemporary social situations and life revolving around metropolitan cities.

Staying away from romance, the movie discusses about new generation social issues, crimes, irresponsibility of ruling system, commercialization of service sectors and increase in missing of teenagers.

Kannada actress Iti Acharya would be making her debut in malayalam with this movie. After a colourful pooja function held on 2nd October at IMA hall, Jawaharlal Nehru International Stadium Kochi attended by eminent directors and producers representing Malayalam film industry, the shooting is currently at the final stage.