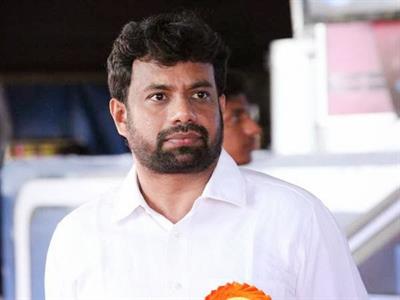 John Brittas, well known as a fire brand Television anchor is all set to try his in luck in acting too. The well experienced journalist who is riding high with his unique style of anchoring would make his entry into the film industry with Madhu Kaithapram's upcoming project.

Titled 'In the Lime Light', this movie will have John Brittas in lead. Written by famous novelist C V Balakrishnan, the movie would be produced under the banner 'V for Vision'.

The movie will be blessed with the presence of many experienced stars from the industry. John Brittas, truly attracted with the powerful script is excited to don the lead role. This will be the fourth movie of Madhu after helming Ekadantham, Madhyavenalil and Orma Maathram. Planned to shoot entirely shoot in Muscut, the movie will begin in December.

John Brittas who started his career as a journalist for Deshabhimani became a celebrity after joining Kairali Channel. After eleven-year of campaign, he resigned from Malayalam Communications Ltd and became a part of Asianet Communications Limited, later came back to Kairali.

JB Junction, anchored by John Brittas currently aired on Kairali TV is one of the most popular show on the channel. It is known that, the mesmerizing style of anchoring made the director to offer him the lead role.

John Brittas who had covered the parliamentary proceedings for both Kairali TV and Desabhimani also covered the general election in Nepal which soon came after the death of King Birendra.

Also experimenting as a writer for various newspapers, John received the Journalism Educational Award for his research on "The Impact of Globalization in Print Media". From small screen to silver screen, 'In the Lime Light' will be a fresh experience for John Brittas who wish to create his own space in the new spear too.