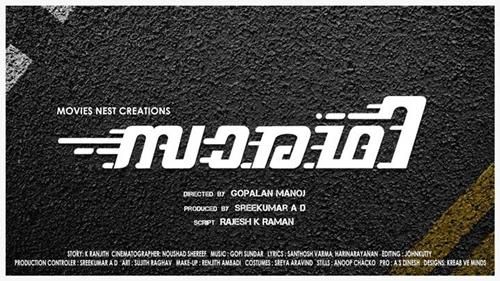 Sunny Wayne who made his screen presence with Sreenath Rajendran's 'Second Show' is gearing up widen his space in the malayalam film industry. After being a part of movies like Masala Republic, Koothara and Mosayile Kuthirameenukal, the actor would join the set of Gopal Manoj's directorial debut.

Titled 'Saaradhi', the movie which is hyped as a travel-thriller revolves around the life of an Ambulance driver who is assigned to transport a dead body from the town to a high range area.

Sunny plays the character role of a easy go guy who enjoys life to its maximum extend. Having no commitment to life, the young man spends money with nothing to save for the future. During his journey, he encounters some incidents which change the rest of his life. The struggle made by him to overcome the issues with the help of a police officer takes the story to the next phase.

Vinutha Lal will pair opposite to Sunny Wayne whole Sreenivasan, Nedumudi Venu and Baiju would give life to other prominent characters in the movie. The movie creamed with suspense and thrills is expected to bring excitement to the young fan followers of the actor. For the lyrics of Santhosh Varma and Harinarayanan, the music will be set by Gopi Sunder.

Sunny Wayne who had proved his mettle as an actor is ready to create magic on silver screen with his next outing, 'Saaradhi' a travel – thriller. Much interestingly the actor was truly blessed being a part of a handful of movies which worked well in theatres. Sunny was a part of movies like 'Second Show', 'Thattathin Marayathu', 'Nee Ko Njaa Cha', 'Annayum Rassolum' and 'Neelakasham Pachakadal Chuvanna Bhoomi' which did wonders in box office. He did get the support of the young audience as the actor took initiative to do a wide range of characters in less time.