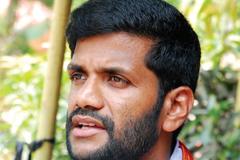 Congress worker K T Benny is standing for elections from Chalakudy in Thrissur District in the forthcoming 2011 Kerala Assembly Elections. Coincidentally, it will be on the same day as his birthday!

K. T. Benny has always been in the party background, one of many workers on the sidelines. Hence, most party members were quite surprised, not to mention critical, of his selection for a party ticket. It is true that K.T.Benny has not exactly been in the political spotlight. Yet, he is not exactly a novice. He has been very much an active member of the Youth Congress, a fact supported by their leader Deepti Verghese who said that indeed he was active in student politics. K.T.Benny has proved his organizational skills as a member Chairman of the student's union of Sri Sankara College in Kalady and is a worker of the Kerala Students' Union. He was also appointed a block President in the Youth Congress.

K.T.Benny is unknown, he is young, and has apparently caught the anger of many Congress party members who don't think he should have got a party ticket at all.

Will he be elected in the 2011 Kerala Assembly Elections?

This resource gives you the complete details about the CPI (LDF) candidate Geetha Gopi in Nattika Constituency, Thrissur District.