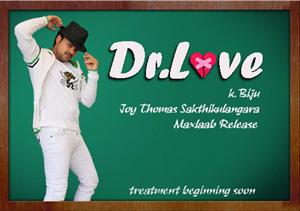 The year 2011 would be a year of success for the youth icon kunchako boban as his new Malayalam movie Dr.Love is getting released in September. Chackochan would play the lead character where is is called by the name Love Consultant. He would be the only actor in malayalam who had done 5 full length till date in 2011 as hero.

After a small gap, the hero is back with a handful of movie. The year 2011 has really proved to be a turning point for Kunchako Boban, the youth icon who has gets a movie released once in 2 months. Traffic,The Race,Seniors,Three Kings,Sevens, and Dr.Love, chackochan is busy with his tight schedule. After back to back hits from Chackochan he has now completed Dr.Love a full length campus movie where kunchako boban plays the character of Vinayachandran who is nick named as Dr.Love of Love consultant. Even though Chackochan had done few successful campus movie, Dr.Love will be a movie ina new flavour. Let us wait for the movie to get released in this onam.