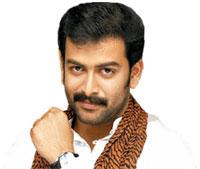 The latest news regarding Prithviraj is that he is ready to act in Bollywood debut film titled Ayya directed by Sachin Kundalkar, who is a Marathi director & the winner of National film award twice in his career. In this film Rani Mukherji will be the heroine. The producer of this film is Arun Kashyap. Actually this is a big budget film relating to a love story. The film will start its shooting by September 2011. As we all know Prithviraj Sukumaran is a popular actor in Malayalam, Tamil & Telugu film industries.

Apart from an actor, he is also a producer in the Indian film industry. His debut film in Malayalam language was Nandanam released in the year 2002. But his debut films in Tamil & Telugu were Kana Kandaen(2005) & Police Police(2010) respectively. He was born to a family of talented persons who were very popular in the film industry. That means his father: late Sukumaran, mother: Mallika, brother: Indrajith & sister in law: Poornima were all working with the film industry. So no doubt he had got his talents for acting from the family itself. But his wife Supriya Menon is a BBC India reporter.