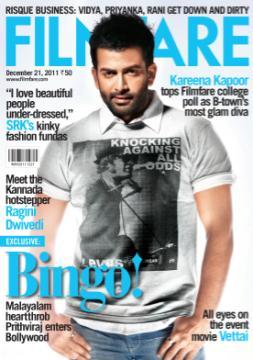 Prithviraj, the heartthrob of malayalis has got in to the record book being the most searched personality according to the recent release by google insight search. Adding to this in the 'Art and Entertainment' category, Prithviraj's marriage become the most searched event. According to records, during mid –April and May there had been a volcanic search for Prithviraj Marriage, Prithviraj Wedding Photos, Actor Prithviraj and Supriya Menon. Still every day thousands across the world search for marriage videos of Prithviraj. Among the movie category, there was a gigantic search for Prithviraj movie Urumi. The movie which is molded into telugu has become the talk of the town. Recently the cover page of South edition Film fare featured Prithviraj too become a favourite search for the netizens. The actor is now busy with the schedule of his debut bollywood movie co starring Rani Mukherjee. It is also expected that the year 2012 too will be the year of prithviraj as he is rising up the ladder of success with a handful of movies in various language and also movies with top directors.

Malayalis have again proved that Facebook cannot replace any thing which has become a part of their life. Facebook has become the top searched word in 2011 by Keralites, followed by the word 'Download' which included movies and songs. 'Santhosh Pandit' which became a rising search word few months ago has totally come down with the latest developments in Kerala related to Mullaperiyar issue. According to google zeitgeist, facebook was listed as the most popular searched word in India. In 2011 Katrina Kaif became the most searched personality while Malayalam director Siddique's Bollywood debut 'Body Guard' topped among the favourite movie.

Google insight and google zeitgeist are two features from the search giant to accumulate the most wanted words in the year.