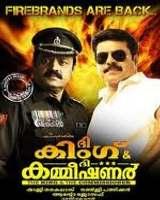 Mammotty's firebrand role IAS officer Thevalliparambil Joseph Alex in 'The King' and Suresh Gopi's Bharath Chandran IPS in 'The Commissioner' are coming together in Shaji Kailas – Renji Panicker new action thriller Malayalam Movie 'The King and the Commissioner'. Both The King and The Commissioner were made by the Shaji Kailas – Renji Panicker team. They were one time the biggest hit director-writer pair in Malayalam commercial cinema, but went apart after 1995.So now they are coming together in 'The king and the commissioner'. Malayalam film' s most memorable action thriller films are like the King, The Commissioner, Thalasthanam, Ekalayavan etc are made by this team. All these films are well known for the punching and sharp dialogues. The movie shooting got a halt in August as Mammootty went on to shoot for Shafi's 'Venicile Vyapaari.' The main location of the movie is Delhi. Kochi, Kozhikode, and Trivandrum are the other locations where the film is shot. 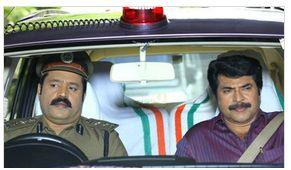 The story is centered on a threat to the internal security leading to a high – profile investigation. Mammotty as Joseph Alex is the head of the National Investigation Agency and Bharath Chandran is the Delhi Police Commissioner. Both of them are coming together to solve the case. But during the initial course of the investigation, both the firebrands fights against each other due to difference in opinion degrading the case. Suresh Gopi is making his appearance just 10 minutes before the interval. The dialogues in the movie is more explosive than the king and the commissioner.

Megastar Mammootty is appearing once again as Joseph Alex, the head of the National Investigation Agency and Superstar SureshGopi as Commissioner Bharathchandran. Since the shooting is still going on, fresh entries are made to the film. Anyway Samvritha Sunil and Sanjana are in the major heroine list. Apart from these actors, Saikumar, Devan, Janardhanan, Nedumudi Venu, Vijay Menon, K P A C Lalitha and Kunjan are playing major role in the movie. 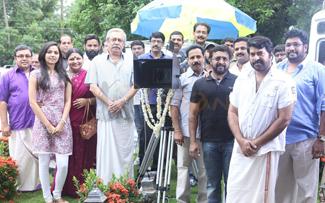 
The impact that Mammooty's Joseph Alex and Suresh Gopi's Bharathchandran had on Malayalam movie audience has been not only significant, but could also be regarded as a milestone. So we can expect much more in The King and The Commissioner from Shaji Kailas – Renji Panicker team. The effort made by film producer Anto Joseph and Mammotty's right hand made this duo to reunion in this film. The audience are expecting no less than a history making blockbuster this time round too.

Football Friends is the next Malayalam movie which is ready to release on May 18th 2011. The movie features Mukesh and Kalabhavan Mani in lead roles. Read more to know about the story, lead cast, supporting cast and other facts about Football Friends movie.

Pathiramanal is an upcoming Malayalam movie which is in the process of shooting and is expected to be released in late 2011. Jayasurya has replaced Prithviraj as the hero of the movie. Read more to know the details, story, cast and technicians of Pathiramanal Malayalam movie.

Rathinirvedam is an upcoming Malayalam film to be released in 2011. It is much-awaited film for the audience of Kerala. The film is a remake of an older version and the new version is expected to create the same sparks as the old one. Read more to know the cast, story, technicians and other details of Rathinirvedam Malayalam movie.